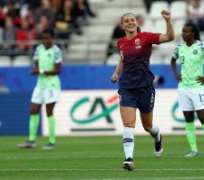 Former champions Norway kicked off their Women's World Cup campaign with a routine 3-0 victory over Nigeria, despite the absence of Ballon d'Or winner Ada Hegerberg.

Guro Reiten's deflected shot gave the 1995 winners the lead on 17 minutes in Reims before a powerful strike from Lisa-Marie Utland doubled their advantage.

Osinachi Ohale turned a cross into her own net before half-time as Norway cruised to an opening win in Group A, leaving them level on three points with hosts France.

Lyon striker Hegerberg, who scored a hat-trick in Lyon's Champions League final win over Barcelona last month, refused to come to the tournament due to a dispute with her national federation, which she accuses of failing to respect women players.