Eden Hazard: 'I think it's a goodbye,' says Chelsea forward 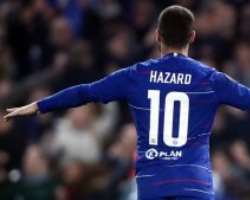 Eden Hazard suggested he had played his final game for Chelsea after his two goals helped them defeat Arsenal 4-1 in the Europa League final.

The Belgian, 28, has been linked with a move to Real Madrid and said that he is now “waiting on both clubs”.

“I think it’s a goodbye, but in football you never know,” he told BT Sport.

But Chelsea manager Maurizio Sarri said: “I know he wants to leave and I have to respect his decision.”

Sarri added: “He is a wonderful player. It took two or three months for me to understand him as a man and now I do, he’s a wonderful man.

If the final in Baku was Hazard’s last match, then it brings to an end a seven-year association with Chelsea, having joined them for £32m from Lille.

Hazard made 352 appearances for the Blues and his two goals in the final moved his tally for the club to 110.

Discussing his future, he said: “We will decide in a few days – the only target in my mind was to win this final. Maybe now it is the time for a new challenge.

“My dream was to play in the Premier League and I have done that for one of the biggest clubs.”

Hazard was named PFA Player of the Year in 2014-15, scoring 14 Premier League goals as Chelsea won the title. He then struck 16 league goals as they regained the title two seasons later.

Wednesday’s Europa League victory was his second in Chelsea colours, as he also collected a winners’ medal, despite not playing, in the 2013 final.

‘Most skilful player Chelsea have had’ – reaction

Former Chelsea midfielder Cesc Fabregas on BT Sport: “When Hazard has the ball, you expect something to happen and the rest of the players come alive. I cannot say he will be the best player in the club’s history, but he is the most talented player they have ever had.”

Pat Nevin, former Chelsea and Scotland winger, on BBC Radio 5 Live: “Hazard is the most skilful player that’s ever played for Chelsea, and that’s saying something because look at the quality of players that they’ve had. He’s astonishing.

“Former midfielder Frank Lampard may have had a better impact but for pure skill, Hazard is world class, and he had yet another ‘worldie’.”