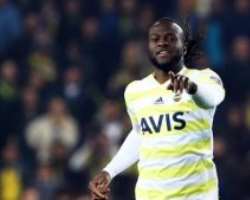 Victor Moses has intensified the speculation that he will reunite with Antonio Conte at Italian Serie A side Inter Milan next season after confirming he will leave Fenerbahce.

Conte is expected to be confirmed as manager of the Nerazzurri next week and is believed to have the former Nigeria international on his wishlist.

Moses flourished under the Italian tactician at Chelsea in a wing-back role, helping the Blues to win the 2016-17 Premier League as well the FA Cup trophies.

He found game time difficult to come by under Maurizio Sarri and opted to join Fenerbahce on an 18-month deal in January.

Since teaming up with the Turkish Super Lig side, the 28-year-old winger has scored three goals in 15 appearances.

Despite relishing his time with the Yellow Canaries, he has announced his impending departure from the side.

“I had a very enjoyable experience, but I won't be here next season,” Moses was quoted by  Football Italia.

“I am leaving Fenerbahce. I want a new adventure in my career.”

On the international scene, Moses' Nigeria will feature in the 2019 Africa Cup of Nations in Egypt, slated for June and July.

The Super Eagles are in Group B along with Burundi, Guinea and Madagascar.