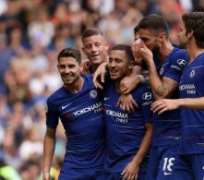 Chelsea are currently training in Boston ahead of their  charity match against the  New England Revolution  on Wednesday, and plenty of their players have been asked to focus on one of the main questions in world soccer right now.

'So, what is going on with  Eden Hazard ?'
That's fair enough, as Chelsea's next few seasons depends heavily on whether or not the Belgian superstar is going to sign a new deal (unlikely) or head to  Real Madrid  this summer (highly likely).

After their final game of the Premier League season Hazard said publicly that he has told Chelsea what he wants to do, and with just one year left on his current contract it is believed he wants to join Real Madrid this summer and play for Zinedine Zidane.

Speaking to our partners Sky Sports about Hazard's future, Chelsea's Brazilian center back  David Luiz  mentioned his experience and a cycle being finished…

“I want him to stay, of course, he's a great player and I want to play with the best,” Luiz said. “But he has to decide. I decided for myself when I left Chelsea for PSG. It was not easy for me but it was a decision I took in the moment because my cycle was finished here. I was trying to feel a different challenge and everybody respected that. So just respect him also. He has to decide for himself. He is a great player and a great friend of mine. He came here as a little boy and now he is one of the best players in the world. I wish him all the best, I just hope he can stay with us.”

Chelsea midfielder  Ruben Loftus-Cheek  echoed Luiz's sentiments, but there is a growing sense that the west London club are prepping for Hazard's impending departure.

“Everyone at the club wants him to stay; players, fans, staff and manager included,” Loftus-Cheek said. “He is such a talent and a player who has contributed to the club massively over the past seven years, the titles he has helped the club win. Everyone has enjoyed watching him play over the past seven years so I'm sure the club thanks him for what he's done. If he does decide to move on, we wish him all the best.”

These comments are similar in nature and it seems as though Chelsea's players are resigned to losing Hazard after their UEFA Europa League final against Arsenal in Baku, Azerbaijan on May 29.

What can Chelsea do in this situation? The best thing to do is get as much money as they can from Real for Hazard, but they are backed into a little bit of a corner.

With their appeal against a transfer ban until July 2020 upheld — Chelsea have appealed to the Court of Arbitration for Sport, which is their final chance to overturn the sanction for breaking rules over signing overseas players under the age of 18 — the Blues may decide to keep Hazard for next season despite his desire to leave.

Chelsea would likely want $140 million for him this summer, but will Real pay that? They know they can get Hazard for free in the summer of 2020, as they could also agree that deal from Jan. 1, 2020. This situation promises to be the transfer saga of the summer, and it is all about valuations. How much would it actually cost Chelsea to cash in on Hazard while he still has some value? And will Real draw this out as they always seem to do?

This is a tricky one. Do you keep a player who wants to leave against his will and then let him leave on a free next summer? Or do you sell him now and risk not qualifying for the Champions League next season? The latter could produce an even larger financial headache for Chelsea to solve.

Decisions. Decisions. The clock is ticking for Chelsea, Real Madrid and Hazard, but if the comments from his teammates are anything to go by, there is only one outcome here.

Meanwhile, Callum Hudson-Odoi increasingly wants to stay at Chelsea and assurances he would be the man to replace Eden Hazard would help to ensure that he renews his contract,  Goal understands.

Hazard looks likely to depart for Real Madrid after he confirmed in an interview after the final Premier League game of the season at Leicester on Sunday that  he ‘has made his decision’ regarding his future .

Meanwhile, Chelsea are trying to retain Hudson-Odoi, having previously taken a strong stance in rejecting Bayern Munich’s four offers in January, even after the teenager handed in a transfer request to try to force a move to the Bundesliga table-toppers.

The 18-year-old’s desire to want a move away has softened after Maurizio Sarri gave him four Premier League starts in a row before  he suffered an Achilles tendon rupture against Burnley in April .

He underwent an operation in Spain and, now back in London, the England international is keen to resolve his future but he has yet to have a contract offer from Chelsea with talks likely to begin after the Europa League final against Arsenal on May 29.

Like Bayern, Chelsea could offer Hudson-Odoi his preferred No.10 shirt which has been worn by Hazard for the past seven years.

Bayern offered Hudson-Odoi the No.10 shirt that was worn by legendary winger Arjen Robben, and a starring role in their team as part of their January bid.  They remain interested and could come back into contention for the youngster  if talks don’t progress well with Chelsea director Marina Granovskaia.

Manchester United are also interested in Hudson-Odoi but they would find it even harder than Bayern to sign him due to their rival status in the Premier League.

All options remain open to Hudson-Odoi but Chelsea are well placed to secure a contract renewal.

The London-born winger, meanwhile, is also aiming for an early recovery from a similar injury which previously kept Arsenal defender Laurent Koscielny out for six months.

He is loosely targeting a return for the start of the Premier League season in August after a successful operation but he won’t be allowed to rush back by Chelsea’s medical staff.

The club's Young Player of the Year said that he was feeling good at the awards ceremony last week.

“I think the surgery went really well. Everything went perfectly as I wanted it to. I am really happy to win the award. I think the season went well and I feel that every time I have played I felt more confident and I enjoyed it,” Hudson-Odoi said at the Under the Bridge venue in west London.

“I enjoyed every moment of playing. I just need to keep working hard and hopefully get more opportunities.”

Chelsea’s decision to not begin talks with Hudson-Odoi, and regarding other club issues, may relate to the transfer ban, which is likely to affect negotiations with several of their players.