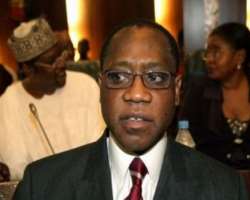 Nigeria's state governors on Tuesday voiced opposition to having a sovereign wealth fund manage the country's oil wealth, an early sign that new Finance Minister Olusegun Aganga will have to fight for reforms.
Aganga has championed the idea of a sovereign fund to help Africa's most populous nation save some of its oil revenues for the future, invest in critical infrastructure and help stabilise the OPEC member's finances when world oil prices are volatile.

He wants the fund to replace the current arrangement by which Nigeria saves oil revenue above a benchmark price into an excess crude account (ECA), a pillar of reforms launched in 2003 and backed by the International Monetary Fund that had the same aims.

But there is no clear legal basis on which to determine how the savings in the ECA should be shared between the tiers of government -- federal, state and local -- leading to constant political wrangling and the squandering of much of the money.

State governors have been among the main beneficiaries of disbursals from the account.

Aganga has said a main aim of the sovereign wealth fund would be to establish a firm legal framework for the management of Nigeria's windfall oil savings.

"We the governors think there should be an alternative source of funding to be used (for the sovereign wealth fund) than that of the excess crude account," Benue state governor Gabriel Suswan told reporters after a meeting with Aganga.

He did not elaborate on what alternative source of funding the sovereign wealth fund could be drawn from.

Accountant General Ibrahim Dankwambo said earlier on Tuesday the ECA stood at around $3.4 billion, less than a quarter of the amount it contained at the start of the current presidential term three years ago.

Aganga, a former London-based executive at U.S. investment bank Goldman Sachs, took over as finance minister in April as part of a cabinet reshuffle by President Goodluck Jonathan, who was then acting head of state while late President Umaru Yar'Adua was on his deathbed.

The appointment of a quietly-spoken technocrat with a stellar private sector career raised hopes among investors that he would bring positive change to a country with a reputation for weak governance, mismanagement and corruption.

But some analysts questioned whether Aganga's background at a Wall Street bank equipped him for the political battles he would need to fight as a Nigerian minister.

Nigeria's 36 state governors are immensely powerful figures, some of whom control budgets larger than those of neighbouring countries. They also form a strong caucus in the ruling People's Democratic Party.

Jonathan said in April he wanted a sovereign wealth fund established within months, meaning Aganga has the highest backing.

"The governors' committee will consult and come out with (an alternative) source of funds for the proposed sovereign wealth fund and submit their report to the federal government committee chaired by me in the next two weeks," Aganga said.