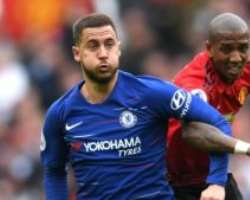 Chelsea star Eden Hazard has reiterated his desire to play in the Champions League next season as the race for the top four in England remains wide open.

Hazard has been regularly linked with a move to Real Madrid in recent months, as Chelsea have stumbled in and out of the qualification places at the top of the Premier League.

Having missed out on Europe’s biggest competition this season, regaining their place among the continent’s elite for 2019-20 is seen as essential for the Blues.

Sunday’s 1-1 draw with Manchester United  keeps Maurizio Sarri’s men narrowly inside the top four, two points ahead of Arsenal in fifth, but Hazard is desperate for his side to kick on and secure that spot.

“Chelsea has to play in the Champions League every year,” the Belgium international signalled to Sky Sports after the final whistle.

“It’s one of biggest clubs in the world, and for myself also I want to play in the Champions League, and we will.”

Former Chelsea star Juan Mata hit early against his ex-employers at Old Trafford to put United in the lead on Sunday,  before a goalkeeping blooper from David de Gea  delivered a simple chance for Marcos Alonso to equalise.

Hazard admitted that he was content with the share of the points, but believes that his side had enough to take victory late on.

“A good day but could be better. We came here thinking about winning the game, a draw is not a bad result for us but I think if we believe a bit more in our chances we can score another goal,” he added.

“We started slowly but today we had a reaction and scored our goal. I don’t remember one chance for them in the second half and yes we just played a good game.

“The game was hard, in a good way, this Man Utd – Chelsea game is always tough.”

Chelsea’s attention now switches to the Europa League, with semi-final clashes against Eintracht Frankfurt coming on May 2 and 9.

Domestically, the Blues finish their campaign with a home clash with Watford before visiting Leicester City on the final day of the Premier League season a week later on May 12.