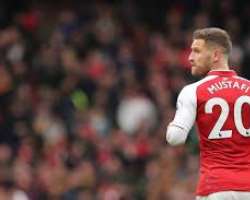 Arsenal  star Mustafi was abject as the Gunners saw their hopes of a top four finish dealt a huge blow by Crystal Palace on Sunday.

The north London side entered the showdown at the Emirates aiming to take full advantage of slip-ups experienced by Tottenham and Manchester United.

But Arsenal were rocked on a sunny day in north London, with Palace prevailing courtesy of goals from Christian Benteke, Wilfried Zaha and James McArthur.

Mustafi was hammered by Arsenal fans and pundits alike after the game, with the Germany international enduring another tough afternoon.