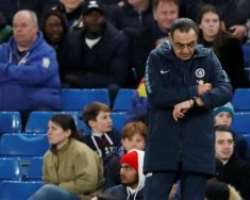 CHELSEA manager Maurizio Sarri may be tempted to ring the changes for the Blues’ upcoming Premier League clash with Brighton on Wednesday (7.45pm).

Sarri is expected to shuffle his pack as Chelsea look to stay in contention for a top four finish and secure Champions League football next season.

The Blues picked up a vital  2-1 win away at Cardiff on Sunday , with late goals from Cesar Azpilicueta and Ruben Loftus-Cheek required to break down the stubborn Bluebirds defence.

And Sarri may look to freshen up his squad after such a limp performance, meaning a number of star players are in danger of dropping to the bench.

Gonzalo Higuain is the player most obviously at risk, with the Argentine ineffective when compared to his replacement  Olivier Giroud .The Frenchman should get the nod in attack, supported by  Eden Hazard  after the Chelsea talisman came on as a substitute to change the game at the weekend.Meanwhile, Pedro was poor at the Cardiff City Stadium and could find himself missing out in favour of Callum Hudson-Odoi.

Sarri revealed that the teenager would start two or three of Chelsea's upcoming matches  but left the youngster on the bench in Wales.

Willian is another option, having been the best of a lacklustre attack, although the Brazilian may be rested with a hectic schedule coming up