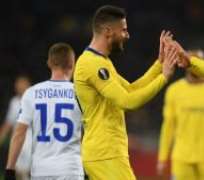 Olivier Giroud had a hat trick as Chelsea demolished Dynamo Kiev 5-0 in their Europa League round-of-16 second leg to win the tie 8-0 on aggregate.

Chelsea took a 3-0 first-leg lead into the match in Kiev and added an away goal inside of five minutes when Giroud pounced on a Ruben Loftus-Cheek header following a corner and redirected it past Denys Boyko for the opener.

Loftus-Cheek came close to doubling the lead shortly after, but Boyko palmed his close-range shot away from goal after Marcos Alonso had played him into the penalty area.

The hosts looked to be on level terms just after the 20-minute mark, but Denys Garmash’s tidy outside-of-the-boot chip past Kepa Arrizabalaga was rightly ruled out for offsides.

Two more goals for Chelsea before half-time — Giroud’s second and a sliding finish from Marcos Alonso from a Callum Hudson-Odoi cross — put the tie to bed for Maurizio Sarri’s side with 45 minutes left to play.

Giroud completed his perfect hat trick — goals with the left and right foot and one with his head — in the 59th minute with a towering header from a Willian free kick to make it 4-0 as the rout continued.

Teenager Hudson-Odoi got on the score sheet before the final whistle, using his speed to outrun the Dynamo defence on the counter and easily beat Boyko to make it five goals on the night for Chelsea.

The Premier League side will now await Friday’s draw to see who they will face in the quarterfinals, with a spot in the Champions League on offer for the winner of the second-tier European continental tournament.