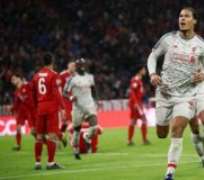 It was one of those occasions when Liverpool reminded themselves why a banner can usually be seen at their games proclaiming the club to be “European football royalty.” And, finally, when it was all over, Jürgen Klopp and his players could celebrate and, for the first time since 2009, the Premier League had its fourth team in the quarter-finals.

Not that Liverpool's euphoria at the final whistle was, in any way, couched on behalf of their domestic rivals. This team have their own priorities, as five-time winners of this competition, and they could reflect on a hugely satisfying night of mature and controlled football. They defended stoutly, they were clinical with their chances, they never showed a flicker of trepidation and, more than anything, they demonstrated the value at this level of scoring away goals.

First, it was Sadio Mané with the opening goal, 26 minutes into the first half, meaning Bayern would need to reply with at least two of their own to save themselves. Bayern did manage one, via an own goal from Joël Matip, but the truth is they rarely looked capable of completing the recovery. They did not have either the wit or the creativity and it led to the two headed goals from Virgil van Dijk and Mane that meant Liverpool's supporters could spend the latter parts of the match happily going through their victory songs. They had eliminated one of the giants of the sport and, amid the jubilation, there was also a sense of deja vu attached to this story.

High in the third tier of this spectacular stadium, there must have been plenty of Liverpool supporters who remembered what happened in 1981, at the old Olympiastadion, when a goalless first leg at Anfield was followed by a 1-1 draw to put Bob Paisley's team into the final at Bayern's expense. This is the beauty of the away-goals rule and, though there are plenty of people who dislike its presence, the whole point is to encourage teams to attack. Bayern opted for ploys of conservatism when they visited Merseyside three weeks ago and that ultimately put them in this position where a single Liverpool goal could dramatically change the complexion of the evening.

Mané, arguably Liverpool's most effective attacker since the turn of the year, had started on the right, Mohamed Salah's usual position, but temporarily reverted to his usual left-sided position after 10 minutes and it was from here that he put the tie in Liverpool's favour.

This was his ninth goal in the last 10 games, his 18th in total for the season, and it was a wonderfully composed finish once he had controlled a long ball forward, held off Rafinha and then sidestepped Manuel Neuer to create the shooting opportunity. Neuer's decision to run out to the edge of his penalty area was a poor one, leaving the goalkeeper in no-man's-land, but there were still plenty of red-shirted Bayern players who could have covered for him if Mané's left-footed shot did not have the right leverage. It was a swivelling, clipped finish, pitched towards the far corner and floating delicately inside the post almost in slow motion. He had made it look much easier than it actually was.

Behind that goal there was a huge banner, among the derogatory one making it clear what Bayern's supporters think of VAR and Uefa, that read: “Kampfen Munich.” Unfortunately for Liverpool, that is exactly what their opponents intended to do: fight. Bayern are simply not the type to crumple and their quick response was probably a reminder why they have won the Bundesliga for the last six years and look a good bet to retain the trophy again this season, too.

Even so, Klopp must have been pained by the manner of the 38th-minute equaliser because, until that point, there had been only sporadic moments when Liverpool had seemed vulnerable. This was the first time that Serge Gnabry had managed to get behind Andrew Robertson. Surging into the penalty area, Gnabry's cross-shot was heading diagonally, right to left, towards Robert Lewandowski at the far post and Matip would probably have known as much in that split second when Liverpool's centre-half tried to get in the way. His problem was that the ball had been struck with power and was flying towards him at speed. Matip could not adjust his feet quickly enough, diverting it past Allison from close range.

Klopp's team selection had been unexpected bearing in mind Fabinho, one of Liverpool's more impressive performers recently, was omitted from the starting lineup. Yet the Brazilian still played the majority of the game because of Jordan Henderson going off during the early part of the match with an ankle injury.

Liverpool were compact and organised and Trent Alexander-Arnold, in particular, gave Franck Ribéry little space to dispel the theory that the winger is no longer the devastatingly brilliant footballer he once was. Bayern might be a regular in Europe's elite but, over the two legs, they have looked like a strong, difficult opponent rather than the formidable one of previous years. For Liverpool, the night was open with all sorts of possibilities.

Van Dijk's goal came from a corner. James Milner swung over the ball from the right and Van Dijk was able to climb the highest, keeping his eyes on the ball and then applying the downward header despite the close proximity of Mats Hummels and Javi Martínez. Bayern needed something spectacular but that rarely even threatened to do so and the game was effectively settled once Mané had headed in Salah's flicked cross. – Guardian