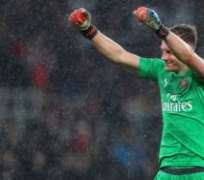 Pierre-Emerick Aubameyang and Bernd Leno said Manchester United's extravagant celebrations at the Emirates in January had provided Arsenal with added motivation in their 2-0 victory on Sunday .

United beat Arsenal 3-1 in the FA Cup in January, when Jesse Lingard performed a moonwalk dance in celebration of a first-half goal and then described the Emirates as a 'dance floor' in a social media post.

Arsenal playmaker Mesut Ozil responded after Sunday's 2-0 win with a tweet that read “Dancefloor huh!?” and Aubameyang has revealed that his own attempts at a “special celebration” were foiled when he could not find a mask he had planned to wear.

Aubameyang has famously donned a Spider-Man mask to celebrate goals at previous clubs and the striker hoped to do the same again after his second-half penalty against United.

Asked if the 2-0 win was a form of revenge for the FA Cup defeat and for Lingard's celebration, goalkeeper Leno said: “I don't know but in your mind you will never forget something like that, when somebody is celebrating.

“You don't want to see it again so we were motivated and we knew before the game about our chance because United had one more point than us. Now we have two points [between the teams] and that was enough motivation for us.”

Aubameyang's goal allowed him to move on from his last-minute penalty miss against Tottenham Hotspur in Arsenal's previous Premier League game. The 29-year-old revealed that he was encouraged to take the spot-kick by Alexandre Lacazette, his close friend and strike partner in north London.

“After Lacazette got the penalty he said to me: 'You have to shoot,'” Aubameyang said. “I feel well and I was ready to score. I watched it a lot, the penalty I missed. I knew that I made a mistake when I shot last week. But in life you have to always look forwards and I had to be focused and that's what I was.

“This friendship [with Lacazette] is really really strong and straight after he fell down, he watched me and said: 'You shoot. You have to be focused and you shoot.' So yeah it's a great partnership and, of course, the coach decides who plays and whether we play together or not. And we have to accept that, that's normal. But I think we are both really focused on playing for the team and giving our best.”

The victory moved Arsenal above United and into fourth place, only one point behind Spurs. Emery's side also have arguably the most favourable run-in to end the season, and Aubameyang said their hopes of reaching next season's Champions League are now in their control.

“Now we feel that we have everything in our hands,” Aubameyang said. “We know that it will be tough but we want to do something. We want to get back into the Champions League. We are really hungry. When you see it on the TV and you hear the music it is something special. So yeah, we have to carry on and win games to be in the top four.