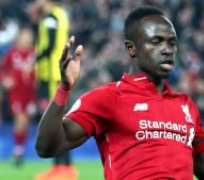 Liverpool warmed up for the Merseyside derby against Everton with a convincing 5-0 victory over Watford on Wednesday. James Walker-Roberts assesses the Reds’ performance and Sadio Mane’s new role…

Wobble over? And just in time?
After three draws in their last Premier League four matches, a lead cut from nine points down to one, and questions over their somewhat misfiring front three, Liverpool hit back against Watford.

Gary Neville said Jurgen Klopp’s side missed the chance to make a “statement” when they were held to a 0-0 draw by an injury-hit Manchester United on Sunday; was this it.

On a night when Manchester City edged a victory over West Ham, Liverpool produced one of their more impressive performances under Klopp.

This was more like the free-flowing Liverpool of 2018 than the side who have appeared to be feeling the title-race pressure in 2019. But then they were playing perhaps the most obliging opponents.

Watford have been in good form in the league, but had conceded 11 goals on their last two visits to Anfield and their defence rarely looked like they would be able to restrict Liverpool as United had done so effectively.

Liverpool were forced into a change from their visit to Old Trafford with Roberto Firmino missing out with an ankle injury. Divock Origi was, somewhat surprisingly, chosen ahead of Daniel Sturridge and Xherdan Shaqiri to replace Firmino.

Origi has already impacted Liverpool’s season with his dramatic late Merseyside derby winner in December, but, considering this was only his second Premier League start of the campaign and he had only 101 league minutes under his belt, there appeared an element of risk in his selection from Klopp.

If Origi’s selection was a surprise, then it was also surprising to see the striker starting out on the left side, with Sadio Mane leading the line and Mohamed Salah on the right.

Perhaps Watford were also surprised, at least it appeared that way when Mane, one of the smaller players on the pitch, got between Craig Cathcart and Adrian Mariappa to head in the opening goal in the ninth minute.

Asked afterwards about the decision to deploy Mane up front, Klopp said: “It was the first idea, the first thought, and we didn’t change it. In that position you need someone who is able to play in the small space, who can give you as well offers in behind, who adapts to the defensive situation, who is football-smart, all that stuff.

“We have other players who can play there but not in combination of the speed of Sadio. He played different positions in his life and for us as well, so I was in no doubt that he would play there.”

Mane has now scored in each of Liverpool’s last five home matches and his tally of 14 goals is his best in a Premier League season.

It was exactly the start that Watford would have been desperate to avoid, and it was to get worse.

Mohamed Salah and Trent Alexander-Arnold tormented the visitors down the right, regularly getting two-on-one opportunities against Adam Masina. Watford were pinned back and any time they did threaten to break, Fabinho seemed to be in the right position to track back and win the ball.

Mane’s second goal – a sublime backheeled volley – again came from a central position, and, although it was only the 20th minute, there already looked to be little hope for Watford to do anything other than avoid another Anfield thrashing.

Liverpool continued to cause problems down the right side, with Salah hitting the post and Alexander-Arnold almost adding another assist.

Mane drifted more from his central role in the second half, but he continued to link up nicely with Salah and Origi, who got on the scoresheet with a low shot in the 66th minute.

Despite his heroics against Everton earlier in the season, Origi is unlikely to keep his place if Firmino is available to return in the Merseyside derby on Sunday. However, Mane’s display in a central role comes at an intriguing time for Liverpool.

With questions over the front three – Jamie Carragher said on Sunday that they “haven’t quite exploded this season” – might Klopp be tempted to mix things up more over the next month? He has options at his disposal, and this display might encourage him to utilise them more often.