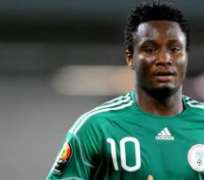 Middlesbrough are set to announce the signing of Mikel John Obi on a deal until the end of the season after he passed a medical and agreed personal terms. The 31-year-old former Chelsea midfielder is a free agent after leaving China's Tianjin Teda by mutual consent this month.

A Nigeria international who played in last summer's World Cup in Russia, Mikel spent 11 seasons at Chelsea before relocating to China two years ago. He has also been the subject of interest from Crystal Palace, along with a handful of Middlesbrough's Championship rivals, but has chosen Tony Pulis's promotion-chasing team.

Mikel's girlfriend, Olga Diyachenko, and their twin daughters live in London and he has been keen to return to England.

Boro are fifth in the second tier – six points behind Norwich, occupants of the second automatic promotion place, and seven behind the leaders Leeds – and Pulis has been keen to strengthen his squad.

He hopes to keep Stewart Downing but the 34-year-old former England winger's contract contains a clause dictating that, if he makes one more appearance, a new one-year deal will be triggered. Pulis has said Downing is “one of the best players I've worked with” and hopes talks between Steve Gibson, Boro's owner, and the player will lead to a satisfactory conclusion. Burnley are among those monitoring the situation.

Middlesbrough are one of several teams pursuing the Sunderland striker Josh Maja but he seems most likely to join West Ham, who would immediately loan him back to the League One promotion-chasers for the remainder of the season.

Pulis has also taken note of Yannick Bolasie's return to Everton after cutting short a loan at Aston Villa . Boro's manager is interested in taking the winger for the remainder of the season but Bolasie seems minded to try to reclaim a first-team place at Goodison Park.

Elsewhere, Bournemouth have signed the Wales central defender Chris Mepham from Brentford for an undisclosed fee believed to be £12m. The 21-year-old, who has four caps, has been a longstanding target for Eddie Howe.

“It's taken a while to get my signature on the dotted line but it's been worth the wait,” Mepham told afcbTV. The Guardian, UK