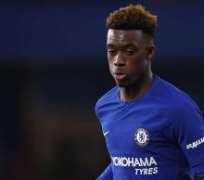 Hudson-Odoi's future has come under speculation as his lack of playing time with the Blues has made the teenager hesitant to renew his contract, which expires in 2020.

There is a thought Hudson-Odoi could follow in the footsteps of Jadon Sancho, who departed  Manchester City  for  Borussia Dortmund  and has become one of the most productive players in the  Bundesliga  at age 18.

Bayern Munich has looked to pounce, as Goal understands the reigning  Bundesliga champions have tabled four bids for Hudson-Odoi, the latest worth £35 million ($45m) for the 18-year-old winger .

That fee would indicate Bayern see Hudson-Odoi as a player who can contribute right away and Robben, who will be departing the German club at the end of the season, thinks that when an opportunity to comes along, it behooves a player of the youngster's talent to take it.

“He is one of the best (young players) in Europe,” Robben told beIN Sports. “You are better off getting your chance and if you get that chance then you have to take it.

“For young players, it's always the same. First, you have to take the big step to achieve it. Become a professional football player at the highest level, get into the first team, get your place.

“Then, second, which can be more important, what's sometimes missing is that you have to stay there. Staying there is often more difficult than actually becoming a footballer in the first place.

“You have to to prove it, game after game, season after season and don't be happy.

“Don't just be happy when you achieve something little or small.”