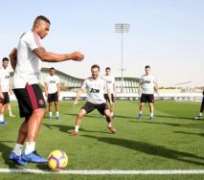 Ole Gunnar Solskjaer has been busy working on a blueprint to beat Tottenham, Arsenal, Paris St-Germain and Liverpool during Manchester United's training camp in Dubai, according to midfielder Scott McTominay.

United have used their six-day stay in the Middle East to boost fitness levels and strengthen bonds in the squad.

But Solskjaer has also used the training sessions at the NAS training complex in Dubai to work specifically on tactics and strategies for Sunday's trip to Wembley to face Spurs in addition to the forthcoming FA Cup fourth round tie against Arsenal on January 26 and next month's games against PSG in the Champions League and Liverpool in the league.

“It's a good time for the squad to get away and have some really good bonding time,” explained McTominay. “But we've also been able to work really hard on different formations and different ways we want to play against bigger teams in the games coming up.”

Solskjaer had hinted at his wider plans in the wake of  United's FA Cup win over Reading on Saturday  when he said: “We need to use this week well to work towards the Tottenham game but also towards Paris Saint-Germain and Liverpool in February. You just don't make it for the Tottenham game, we prepare for this one but we also prepare for when we play the bigger and better teams.”

Meanwhile, midfielder Paul Pogba has given the clearest hint yet that he will be fit to face Tottenham after missing the Reading game through injury.

“It's not a holiday, we came here to work,” said Pogba,  who joined up with the squad on Monday after initially staying behind in Manchester for treatment . “The training is intense as we're preparing for a big game so we need to be ready.

“We've had good conditions to do some hard work and when we go back we've got a fresh mind and fresh air and we come back to focus even more.