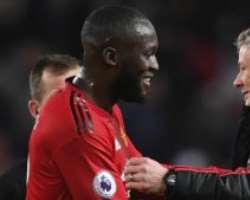 Lukaku had looked out of form and down on confidence before Jose Mourinho was sacked last month, however, he has enjoyed a revival under caretaker manager Solskjaer.

The 25-year-old – who only found the back of the net twice in the final three months of Mourinho’s tenure – scored in consecutive Premier League fixtures before netting in Saturday’s 2-0 FA Cup victory over Reading.

Lukaku is reaping the benefits under United favourite Solskjaer and the Belgium international said: “He talks to me all the time and I like that.

“He played in a way that I like to play, and also the rest of the team, and we are just enjoying our football right now.

“He’s taught me a lot. Movement-wise, and stuff like that, but obviously he knows the type of striker that I am. From the first day when I came back in, he did a total analysis of my game. I was really surprised but he helped me a lot and I am looking forward to keeping on working with him.

“He really wants me to face the goal because he knows that I am at my most dangerous when I do that, when I’m moving off the shoulder of the defender but also trying to stay on the move all the time.

“The work that we have been doing over the last couple of weeks is good, and I just take it every day at a time and I want to improve my game. He was ice cold when he was in front of the goal and that is something I like.”