Alex Iwobi was in his creative best against Fulham 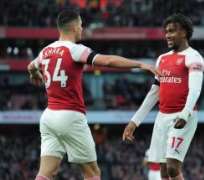 Arsenal have been struggling to count on chances from any formerly reliable creators, but if Alex Iwobi can replicate his match against Fulham, we're all good.

With Unai Emery unwilling to let Aaron Ramsey run free,  Arsenal  are without an assisting kingpin. They are counting on chances from any number of sources and, in such fashion, they never know where they may find their chances on any given day.

Needless to say, you certainly can't rely on Ozil and Mkhitaryan, who have been not only underwhelming but unhealthy. In their absence,  Alex Iwobi  should have had free reign to assert himself, and in some instances, he has.

But no instances quite like  the Fulham match  where, for the first time, I could foresee a future without Ozil or Mkhitaryan, and instead at the feet of Iwobi, who, with one more piece of the puzzle, who rule Ozil and Mkhitaryan wholly obsolete.

He's got the drive, he's got the speed and strength, he's got so many things that not even the two experienced creators have. He can dribble, like so few others on this club, and he hasn't had many injury problems either.

Against Fulham, we saw Iwobi at his creative best. Suited up as a left winger, he was a dynamic creator who combined so well with the wingbacking play of Sead Kolasinac, the two of them combining for the lion's share of chances – seven total, with Kolasinac taking the edge of the split by one.

Iwobi was dangerous with his crosses and didn't look jittery at all, despite his track record of being just that.

The problem isn't what Iwobi can do, it's the consistency with which he can do it. Yet again, we were reminded of how positive he can be, but yet again, we have to remind ourselves that until he gathers some semblance of reliability, he will be missing that final puzzle piece that Unai Emery wants to see out of him before he can truly replace the two creators that he so capably can.

I don't know about you, but I'm getting a bit fed up with the Ozil/Mkhi circus. Even if Iwobi can make clear strides towards reliability, I would give him absolute priority over the other two, solely for the sake of building a future.

Iwobi has been chipping away for years. He's getting better. But one more step is all he needs to complete the replacement he was destined for.