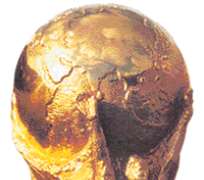 Both countries are pointless after playing one match each in the tournament, the Nigerians lost 0-1 to Argentina at Ellis Park on Saturday, while Greece was downed 2-0 by Korea Republic.

A cultural group welcomed the Super Eagles to the isolated, mountain-side Bloem Spa Lodge and Conference Centre in the early afternoon with dancing and singing, in sotho language.

Players and officials flew for nearly two hours from Richards Bay to the Free State Airport, and all moved in convoy to the hillside hotel, which will be home for the next forty eight hours.

The team would train at the 45,000 -capacity Free State Stadium from 5.30pm, and will hold a Press conference at the end of the training session.

Nigeria beat Greece 2-0 at the 1994 FIFA World Cup in the USA, in the two teams' only previous World Cup meeting, with goals from Finidi George and Daniel Amokachi, both goals coming at stoppage time of each half.