Paul Pogba: Manchester United are now playing as they should do – offensively 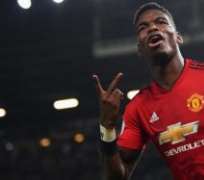 Paul Pogba took a thinly veiled swipe at Jose Mourinho by declaring that Manchester United were playing in Ole Gunnar Solskjaer for a manager that “wants to attack” as the midfielder toasted a “beautiful” finish to a difficult year.

Pogba scored twice for the second successive game as  United crushed Bournemouth 4-1 at Old Trafford  to give their top-four hopes another shot in the arm going into 2019.

The France midfielder's toxic relationship was emblematic of how badly things soured during Mourinho's final months at Old Trafford and Pogba admitted the players were feeling liberated under interim manager Solskjaer.

“It's different. We still won some games with the old manager, it's just a different style of play,” Pogba said. “We are more offensive, we create more chances, play higher. So this is how we want to play, we want to attack, the manager wants to attack. And that's what we are doing on the pitch.

“We needed to win and it was a great performance as well so we're coming back. There is still a long way to go but to finish the year like that is beautiful.

“Maybe we have just realised that we are Manchester United and we need to be at the top of the league. You've seen the reaction of the players. Everyone is enjoying themselves and that's what we need. We need to enjoy playing football, work for each other and that gets the results on the pitch.”

Solskjaer lauded Pogba's two-goal man of the match showing, which followed a brace in the 3-1 Boxing Day win over Huddersfield, and said he was pleased to see there was “no showboating” from the World Cup winner.

“That is a top, top performance from a midfielder – it's work rate, headers, winning tackles, no showboating and it's touch, pass, move,” he said. “He's at his best when he plays that game. There was maybe one flick he could have done better with but not a lot else he could have done.

Asked if he had told Pogba to cut out the showboating, which became a source of serious irritation for Mourinho, Solskjaer added: “No. As I've said to all the players, we want to see the best out of them within the framework of how we want the team to play and all of them really performed up to the top standards.”

Pogba – who now has nine goals for the season – said it was important he scored more and kept improving. “I always want to do more but I also must not do too much – play for the team, play simple, that's the most important – to try to play like that again. There is still much to improve and a long way to go.”