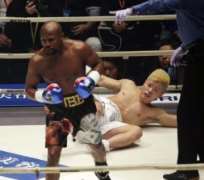 It was a quick payday for Floyd Mayweather to close the 2018 calendar. The 41-year-old boxer earned $9 million to knock out kickboxing star Tenshin Nasukawa in an exhibition fight on New Year's Eve in Tokyo meant to be “all about entertainment.”

Mayweather defeated Nasukawa, 20, with three knockdowns before the end of the first round. He won via technical knockout when Nasukawa's camp rushed to the kickboxer's aid with about one minute left in the first three-minute round.

The  139-second match  came after fans waited more than two hours for the bout, which was  reportedly in limbo over the past two months .  It netted him approximately $65,000 per second, an hourly pay of $233 million. Mayweather reported the $9 million  amount on social media .

The American boxer at first appeared not to be taking the fight seriously, grinning at his opponent and aiming only soft punches at him.

But he then demonstrated his power, launching a series of jabs and hooks to the head of the 20-year-old Japanese fighter, sending him to the canvas after just one minute.

Mayweather took down the kickboxer with two left hooks. A short right put him down a third time and ended the bout, with Nasukawa in tears.

The exhibition fight had no judges. Only a knockout or technical knockout was considered a victory,  according to The 42 . Mayweather set the rules for the boxing-only fight, which included a $5 million fine if Nasukawa aimed a kick at him.

“It was all about entertainment. We had fun,” Mayweather said,  per ESPN . “I'm still retired. I don't look forward to coming back to boxing. I did it just to entertain fans in Japan. I'm still retired, I'm still 50-0, and Nasukawa is still undefeated and a hell of a fighter.”