It is “very difficult” to play every three days: Chelsea boss Maurizio Sarri 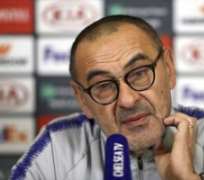 Maurizio Sarri says he is relishing the intense nature of the Premier League’s winter schedule, but warns it is “very difficult” to play every three days.

While other major European leagues, such as La Liga and the Bundesliga, are enjoying a winter break, the Premier League fixtures are coming thick and fast.

Chelsea are halfway through a run of four league matches in 12 days but Sarri, who had never managed outside Italy until this season, says it is “fantastic”.Chelsea travel to Selhurst Park to play Crystal Palace on Sunday, live on Sky Sports, and Sarri admits he is wary of the Eagles after they stunned champions Manchester City at the Etihad last weekend.

Asked whether he was thinking about altering his plans for Palace after that result, he said: “Maybe. For the first time against City, they played 4-5-1. Usually they pay with a 4-4-2. I think we can repeat the 4-5-1 they played against City.

“They are really very dangerous because in the last three matches at home they were able to not concede a goal to the opponents.

0:57
Sarri: Time to decide Hazard future
Chelsea boss Maurizio Sarri wants to resolve Eden Hazard’s future as soon as possible after the playmaker said he will make a decision at the end of the season

Sarri also had praise for Palace boss Roy Hodgson, who worked in Serie A with Inter Milan and Udinese while the Chelsea boss was working in the minor Italian leagues.

He said: “He was and is a very good coach. I remember him in Italy in Inter and the second time in Udine.

“I remember very well and he was a very good coach. I saw his team during the season and they are improving a lot I think.”