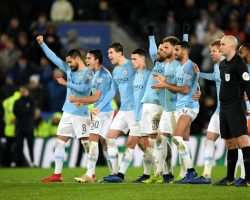 Holders Manchester City edged through to the Carabao Cup semi-finals by beating Leicester City 3-1 on penalties after a 1-1 draw at the King Power Stadium.

A low-quality shootout saw the home side miss three penalties while a dinked attempt went wrong for England’s Raheem Sterling before Ukraine left-back Oleksandr Zinchenko emphatically thumped the decisive kick into the top corner to send his side through.

Pep Guardiola’s side took the lead in the first half through Kevin de Bruyne’s first goal of the season – a sweet low drive into the bottom corner.

Leicester were poor in the opening 45 minutes but regrouped at half-time and levelled the contest through Marc Albrighton’s well-struck effort before crumbling in the shootout.

League One side Burton shocked the Championship’s Middlesbrough to also advance to the last four, while Arsenal face London rivals Tottenham and Chelsea host Bournemouth in Wednesday’s remaining quarter-finals. Stand-in Muric the hero for City

Guardiola demonstrated how seriously he is taking the competition by selecting a team that blended experience and youth with first-team regulars such as Sergio Aguero, De Bruyne and Kyle Walker starting alongside youngsters Phil Foden, Eric Garcia and Brahim Diaz.

But despite the unusual team the Premier League champions lost little of their trademark slick passing as they dominated large periods of the game and enjoyed 66% possession.

Argentina striker Aguero returned from injury and had an effort palmed out by Danny Ward while the Foxes goalkeeper also kept out Foden’s snapshot from the edge of the box.

Winger Riyad Mahrez almost scored against his old club, curling a superb drive inches wide of the post and rolling another effort past the same upright.

Leicester manager Claude Puel made numerous changes himself – including leaving out Jamie Vardy – and his side lacked fluency in the first half although Demarai Gray went close when a low shot was tipped away by City’s stand-in goalkeeper Arijanet Muric.

James Maddison came off the bench in the second period but it was fellow substitute Albrighton who grabbed the equaliser, latching on to Wilfred Ndidi’s ball over the top to smash home.

With no extra-time in the competition the tie went straight to penalties and after Foxes left-back Christian Fuchs lashed over, his team-mates Maddison and Caglar Soyuncu both had poor efforts saved by Muric. ‘It was a good game’ – Guardiola

Manchester City manager Pep Guardiola on Sky Sports:  “A tough game – it is always difficult at Leicester. We played with a guy who is 17 years old and some injured players, it was a good game.

“Raheem Sterling took that decision [to chip his penalty], unfortunately he missed it but that is OK.”

Manchester City goalscorer Kevin de Bruyne on Sky Sports:  “It’s a relief, it was difficult for us. It was a lot of players who hadn’t played a lot. We did a good game, it was an open game and in the end the keeper helped us. He’s got veins of ice! He did what he had to do in the shootout.

“It is difficult to start when you are injured for five months but it felt good to play for 70 minutes. It is a good sign for me.

“I feel stiff but I am happy to contribute. We want to win titles and now it’s two games more and we can battle for another trophy.” Analysis – Puel will be disappointed

City did not put Leicester to bed and the home side made it hard for them in the second half.

Claude Puel changed the game with his substitutions, it was not going for them and they got back into it. Albrighton scored a fabulous goal but Puel will be disappointed because the penalties from his side were very, very poor.

For such a young boy in a pressure situation, it was a clinical penalty from Zinchenko. Albrighton breaks City duck – the stats