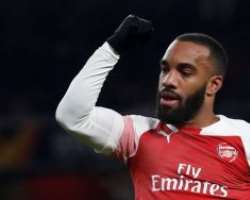 I t was a measure of the significance of this tie for Laurent Koscielny that the Arsenal captain raised a clenched fist in celebration towards the crowd when he made his way off the pitch in the second half.

A relatively inconsequential home match against a little-known side from Azerbaijan may not have been the stage befitting a player of Koscielny's stature, but in the Frenchman's words this was “much more than just a game” for him.

Having not played since he ruptured his Achilles in May, Koscielny has been battling to regain his fitness and then waiting for his chance to finally play again.

The fact that Arsenal had already guaranteed first place in their Europa League group made this the perfect occasion for his return, and there was little surprise that he left the field with a smile etched across his face when he was removed after 72 minutes. “It was very important for me today,” Koscielny said. “It was my last day of rehab, so now I start a new chapter in my career.”

Unai Emery's team selection was arguably the most interesting aspect of a night when the Emirates was only half-full, despite the club saying they had sold more than 58,000 tickets

T here was a place in the side for Mesut Ozil, who marked his return – for the first time in a month – with an assist for Alexandre Lacazette, a surprise inclusion ahead of a potentially testing trip to Southampton this weekend. The Frenchman's goal came when he found room in the box and lashed a powerful shot into the corner of the Qarabag net.

Arsenal should have had a second after half-time, when the impressive Bukayo Saka, 17, missed from close range on his full debut.

A fan broke onto the pitch bearing a flag of the disputed Nagorno-Karabakh region, which has caused conflict between Armenia, the country of Arsenal substitute Henrikh Mkhitaryan, and Azerbaijan. Qarabag players were clearly angered by the display and Gurban Gurbanov, their manager, said: “Only cowards will act like this.”