Klopp: Napoli had no answers to outstanding Liverpool 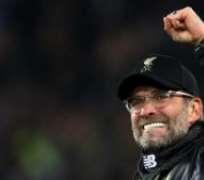 Mohamed Salah’s wonderful first-half goal put Liverpool on track at Anfield on Tuesday but they needed a terrific 92nd-minute save from Alisson to deny Arkadiusz Milik and clinch second spot in Group C behind winners Paris Saint-Germain.

Liverpool had numerous chances to wrap up the points with Sadio Mane particularly wasteful in front of goal, but last season’s beaten finalists are safely through to the next phase of the competition, much to Klopp’s delight.

“I’m not sure if a manager has ever been more proud of a team than I am at the moment,” Klopp said to BT Sport.

“I said to the boys before the game the only good thing from the first game against Napoli [a 1-0 reverse] that they would have no clue who we are, because it was our ugly brothers, it was not us.

“In the Champions League you usually cannot surprise a team, I don’t know if they were surprised, but we had the opportunity to show more than we did at Napoli, and together with the crowd, it was just outstanding.

“The boys played an outstanding game. You could watch all the Napoli games and you would not find a team that caused them the problems that we did tonight. How we pressed them, they had to change their game completely, they had no real key for us in the build up.

“We defended not with size, just big passion. We were strong, took the ball on good runs, Mo scored an unbelievable goal and Alisson made a save, I have no idea how he can make a save like this, it’s just amazing.

“We could have scored more, that’s obvious. But it makes no difference, 1-0, stay focused, stay compact. It was wild after 65 minutes – counter, counter, counter, everybody lost the ball in the wrong moment. We were cool after that.

“We deserved to win and it’s just brilliant. My respect for Napoli couldn’t be bigger, how strong they are.”

Carlo Ancelotti previously said Napoli would be “a*******” if they did not qualify for the Champions League knockout rounds having established a strong position in the group.

But having seen his side fail to break down Liverpool at Anfield, three-time Champions League winner Ancelotti could not pick faults in Napoli’s overall Group C performance.

“We have to accept it, even if this is very disappointing, as we did everything we could,” Ancelotti said to Sky Sport Italia.

“Over the six games, we perhaps did more than anyone expected and came very close to qualification, so there are no regrets.

“We lacked a little sharpness when building our forward play, as Liverpool pressed us very high and in the second half it was more disorganised from both sides.

“It’s true that Liverpool had chances on the counter, but that's because we needed to score and so were a little more unbalanced.

“Having a few difficulties against the side that lost the Champions League Final last season is hardly that surprising.

“You can try to look back over regrets, like Angel Di Maria scoring in the last minute [to earn PSG a 2-2 draw on matchday three], but I don’t think there ought to be regrets.

“We did all we could, we were a little unlucky and now hope to rediscover that luck in the Europa League.”