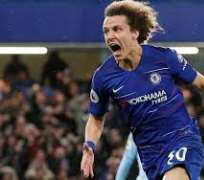 David Luiz's future remains in doubt with Chelsea reluctant to change their policy of only offering players aged over 30 one-year contract extensions.

Chelsea are hopeful Antonio Rudiger will follow N'Golo Kante, Marcos Alonso and Cesar Azpilicueta in signing a new contract, but the German's central defensive partner Luiz is entering the final six months of his deal.

Luiz,  who scored and starred in Chelsea's 2-0 victory over Manchester City , has reaffirmed the fact he wants to stay at Stamford Bridge. But the 31-year-old wants more than the one-year extension that has been offered to him and knows he could get a longer deal elsewhere.

It is expected Luiz will start receiving offers from foreign clubs in January, when he can start negotiating a summer move. As things stand, unless Chelsea review their policy, it is believed he could leave the club at the end of the season.

“I am just trying to enjoy myself, like I do every single day,” said Luiz. “Then, for sure, we will do the best thing for me, for Chelsea, for everybody.”

Asked whether or not he would accept a one-year extension, Luiz replied: “We are still talking, let's see. Let's see what the future brings.”

When it was put to Luiz that, ideally, he would stay at Chelsea, the former Paris Saint-Germain man added: “I love this club, everybody knows I want to stay.”

Luiz, along with Chelsea's other goalscorer Kante and captain Cesar Azpilicueta, was excellent against City after being rested for the midweek defeat to Wolverhampton Wanderers.

City's loss was their first of the season and Luiz hopes that Chelsea may have opened a wound in Pep Guardiola's team, which he described as being “the best in the world.”

“I hope, I hope, I hope so,” said Luiz. “But I also know they are a fantastic team and they accept to lose sometimes too because they have experience of that. But I hope we hurt them and we can move up the table and be closer to them.

“At the moment they are the best team in the world, more than three years together. It is never easy to play against them, but I think we had the right humility and right plan to win the game.

“When you play this type of game, it is a time to give everything and understand how far you can go. So this was an amazing game and we beat the best team in the world.”

Sarri has been confused by the mentality of his team and Luiz admitted that the quality of City's attackers helped to concentrate minds in the Chelsea defence.

“It's true,” he said. “The way they play, they are able to keep the ball, even the goalkeeper is amazing. You have to be honest and have the humility to say 'ok we have to defend, we have to suffer because we play against a fantastic team'. They create many opportunities if you don't concentrate.”

“Of course, of course (I'd rather play against Aguero),” he said. “It's better when you have a reference than without. It's always more difficult when you don't have a reference. But it's not just about one player.”

Alvaro Morata was left out of the Chelsea squad, as Sarri also decided to play without a traditional striker. Eden Hazard was deployed through the middle and assisted both goals, with Olivier Giroud on the substitutes' bench.

Morata was at Stamford Bridge to watch the game and took part in a warm down after the final whistle.

“He's an amazing player and person, and for sure he will bounce back and be in the team,” said Luiz. “He is part of this family, sometimes you are in the group, sometimes not but he's an amazing professional and he has many, many qualities to score many goals for Chelsea.”

Sarri also offered Morata some hope by adding: “I don’t know if in Brighton we will play in the same way or not, maybe not. I don’t know, but I think that Alvaro is able to understand that it is only a tactical decision, not the final choice.”

Surprisingly, Luiz claimed he would have preferred to go up against Sergio Aguero rather than Raheem Sterling, who played as a false nine.