Virgil Van Dijk vs Kalidou Koulibaly – who will come out on top when Liverpool face Napoli? 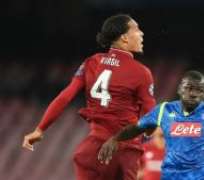 Two defenders in excellent form will be up against each other when Liverpool take on Napoli in the final Group C match of the 2018-19 UEFA Champions League on Wednesday at Anfield.

At 27, Liverpool’s Dutch defender Virgil Van Dijk and Napoli’s Senegalese centre-back Kalidou Koulibaly have been causing nightmares for strikers with their performances.

Gifted with excellent physical abilities and brilliant passing skills, the performances of these two tall defenders will play a key role in determining the outcome of the crucial clash which will shape the outcome of Group C.

Koulibaly was in scintillating form when these two teams met in Italy on Match Day 2 of Group C. Napoli managed a win but remarkably, Liverpool’s lethal attack did not have a single shot on target at Napoli’s goal thanks to a resolute defence led by Koulibaly. He made two interceptions and five clearances and played more passes (80) than any Liverpool player.

Van Dijk plays an important role in the Liverpool team and it is not just about keeping things tight at the back. He is essential to Jurgen Klopp’s strategy to play out from the back and employ a high press. In the Dutchman, the coach has a centre-back who is adept with the ball at his feet.

Van Dijk has won more aerial duels per game than Koulibaly but the latter edges it when it comes to the number of successful passes completed.

Napoli are winless in their last six away matches in the Champions League and Liverpool are unbeaten in their last 18 European matches at home. An early goal at either end could set the tempo for the match and considering what is at stake, Koulibaly and Van Dijk will have to be at their best once again but there is only going to be one winner.