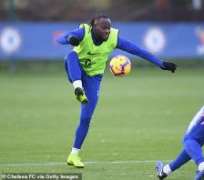 Crystal Palace are interested in signing Victor Moses from Chelsea with the Blues asking for £12million.

Moses played for the Eagles between 2007 and 2010 after coming through their youth ranks and the winger is back on the club’s radar, according to  The Sun .

The 27-year-old has struggled for game time under Maurizio Sarri this season, making only six appearances for the west  London  side.

Moses has fallen out of favour at Stamford Bridge after playing regularly under former manager Antonio Conte.

He played in 40 matches as Chelsea lifted the Premier League title in the 2016-17 campaign, while he made 38 appearances last season.

Moses joined the Blues for £9m from Wigan in the summer of 2012 and has enjoyed three loan spells during his time at the club.