Blow for Man City as Aguero ruled out of Chelsea clash 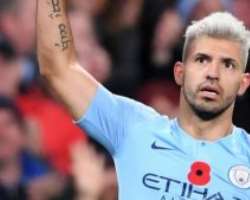 Manchester City will be without star striker Sergio Aguero for Saturday’s Premier League clash with Chelsea, Pep Guardiola has confirmed.

The striker picked up an injury in training and missed the 2-1 victory at Watford and now is set to be unavailable once again for the trip to Stamford Bridge.

Former Blues midfielder Kevin De Bruyne has also been ruled out of the clash in a significant blow to City’s hopes of maintaining their unbeaten start to the league campaign.

Guardiola’s side currently top the table by two points but will be keenly aware that Liverpool – unbeaten themselves – are waiting to pounce on any points dropped by the defending champions.

And the trip to fourth-placed Chelsea represents a significant test for City without their all-time leading goalscorer. Brazilian striker Gabriel Jesus is likely to lead the line in his absence, but the 21-year-old has just one goal in 12 appearances so far this season, although the majority of those have been from the bench.

De Bruyne has suffered with injury problems for much of this season, but the form of Bernardo Silva so far has cushioned the blow of the Belgian’s absence.

Chelsea have just suffered their second defeat of the campaign in a shock 2-1 reverse against Wolves, and City will hope that confidence will be low in Maurizio Sarri’s camp.

“It is another huge demanding test for us,” Guardiola said at Friday’s press conference.

Pep Guardiola said Manchester City were made to suffer after they survived a late scare to beat Watford 2-1 and extend their lead at the Premier League summit. City's victory was played out against the backdrop of off-the-pitch allegations that they have flouted Financial Fair Play rules, but Guardiola insisted on Tuesday night he will welcome any investigation.

“How we play against one of the best teams on one of the biggest stages. How will they react after losing? I can imagine how intense, committed they will be.”

Sarri has attempted to play down his side’s chances against the champions, having failed to beat his Spanish counterpart in their three previous meetings and  claiming their opponents are possibly the best team in Europe.

However, Guardiola has dismissed that tag, claiming City need to win the Champions League to earn that title, while praising the Italian.

“Thank you [Sarri], but we are not the best. We have to win the titles and we didn't win the title to be best team in Europe. The job he is doing is excellent. People don't know how hard it is to create a style,” he added.