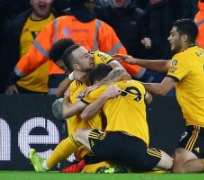 Chelsea were made to pay heavily for missed chances as they squandered a lead to lose 2-1 at Wolves on Wednesday.

But in the same night, Liverpool beat Burnley to keep in touch with leaders, Manchester City. Only two points separate the two teams. Tottenham beat Southampton 3-1, to spoil the debut of coach Ralph Hasenhuttl and topple Arsenal in the fourth place.

At Old Trafford, Arsenal and Manchester United played 2-2 draw, with United coming from behind each time to level the scores.

For Chelsea's Ruben Loftus-Cheek, he looked set to take centre-stage when he marked just his second Premier League start of the season with the opening goal in the 18th minute.

But two goals in four second-half minutes by Raul Jimenez and Diogo Jota brought a dramatic turnaround after the visitors had wasted several opportunities to close out the game.

It was a night to forget for Blues goalkeeper Kepa Arrizabalaga, who committed a howler to concede Wolves' equaliser.

It meant a second defeat in three League outings for Maurizio Sarri's side, which featured five changes in the starting line-up but looked set to claim victory during a comfortable first-half display.

Loftus-Cheek's inclusion in the first XI was a significant talking point after a week of rumours that the young England midfielder could seek a loan move to secure more senior games.

While the 22-year-old's goal had a huge element of good fortune, his performance in the opening 45 minutes was an eye-catching one with a combination of power, deft touches and clever movement providing the home side with consistent problems.

While he faded a little after the interval, it seems inconceivable the Chelsea academy product will not be afforded more opportunities in the remainder of the season.

When Sarri opted to make a second-half change in search of an equaliser following Wolves' impressive turnaround, it was not Loftus-Cheek but N'Golo Kante who made way for Mateo Kovacic.

Kante's position will again raise eyebrows among Chelsea fans, with Sarri choosing once more not to deploy the Frenchman in his favoured holding midfield role.

Summer-signing Jorginho has usurped the World Cup-winner to become Sarri's preferred deep-lying midfielder but even with the Italy international rested, Sarri deployed Cesc Fabregas as his most withdrawn midfielder.

With Chelsea's new manager favouring creativity over energy in the holding role, Kante looks like a star without a role as he enjoyed moments of promise in a more advanced position but failed to impose himself in the manner that made him a title-winning lynchpin with both Leicester and the Blues.

Sarri's regular goalscoring worries were also laid bare once more as Alvaro Morata laboured unsuccessfully for 65 minutes before being withdrawn.

It was a momentous night for Wolves, however, with Nuno Espirito Santo's side recording their first victory in seven league games to bring an end to a slump that had followed an impressive start to the season.

They were second best for much of the first half and had already withstood some Chelsea pressure when the visitors took the lead.

Loftus-Cheek cut in from the left and hit a curling shot that struck the head of the unlucky Conor Coady to wrongfoot goalkeeper Rui Patricio and creep inside the near post.

A fine save by Patricio denied Willan a second goal for the visitors before a brilliant saving challenge from Ryan Bennett thwarted Willian.

Morata and Kante both went close for Chelsea early in the second period but Wolves were level just before the hour mark when Morgan Gibbs-White fed Jimenez, who drilled a low shot under goalkeeper Kepa.

The winner came in the 63rd minute when Matt Doherty crossed and Jota side-footed home.