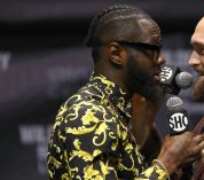 Deontay Wilder  has a luxury, if you can call being thrown into a ring with a 6-foot-9, 260-pound man who is hellbent upon punching you in the face a luxury.

Wilder doesn't have to win the first round. Or the second or the third or the fourth, or any round that comes after it. He is one of the most pure knockout punchers active in boxing and all he needs, literally, is one punch to win.

The WBC heavyweight champion has knocked out every man he's faced. Bermane Stiverne is the only opponent to go the distance with him, but in their rematch, Stiverne was violently finished in the first round.

Now 40-0 and at the peak of his craft, the pressure on Wilder is intense:

• He needs to defeat lineal champion  Tyson Fury  when they meet Saturday in a Showtime Pay-Per-View blockbuster at Staples Center in Los Angeles to swat away the legion of critics who claim his perfect record is a result of hapless opposition.

• He needs an impressive result against the 27-0 Fury to better position himself for the sure-to-be difficult negotiations for a unification bout next year against  IBF-WBA-WBO champion Anthony Joshua .

• A win over the best opponent he has faced is critical to buttress his claim that he's not just the best in a weak era but a fighter who could compete successfully across generations.

Deontay Wilder and Tyson Fury square up during a news conference Wednesday in Los Angeles before their heavyweight title match Saturday at Staples Center. (Reuters)

The fight is the classic match which pits Wilder, the violent slugger, against Fury, the slick and supreme boxer.

There may never have been in the history of boxing a man with the size of Fury who moves as effortlessly and boxes as beautifully. Wladimir Klitschko was regarded as an unbeatable giant during his nearly decade long reign atop the sport, but Fury is three inches taller with a four-inch longer reach.

Two things are all but certain in the fight. Fury will incessantly pop that left hand in Wilder's face, and Wilder will throw that windmill right hand repeatedly.

Wilder faces a simple task, though it may not be so simple to accomplish.

“It's a simple game and it's a lost art from years ago,” said former heavyweight contender Gerry Cooney. “He's got to get past the jab. Here's the deal: Fury doesn't have a physical jab like [Larry] Holmes had or I had, but he's got a long arm that he sticks out there. He's going to be sticking it out there all night long.

Wilder was uncomfortable in his March victory over Luis Ortiz. Ortiz, who came into the fight with the reputation as a slugger, boxed wonderfully for much of the fight, and he was able to keep Wilder off-balance.

Wilder showed something in that fight, though, that is the mark of an elite fighter: He responded to extreme adversity and he found a way to win even when things were going badly against him.

In the fifth round, Wilder dropped Ortiz, but Ortiz got up and came back to fight well, something Wilder wasn't used to have happen to him. In the seventh, Ortiz rocked Wilder and poured it on. Wilder was on very unsteady legs and looked at least for a moment like he may be stopped.

He still found a way to win, and that memory should help him.

It's likely that Fury will be ahead on the scorecards throughout the fight. He figures to be the busier guy, giving angles and turning Wilder, neutralizing that big right.

Wilder is by far the biggest puncher Fury has faced, and Fury will likely respond by fighting defensively and trying to keep Wilder at bay. In Fury's only previous fight in the U.S., he was knocked down hard by Steve Cunningham, who spent most of his career at cruiserweight, in the second round of a 2013 bout in New York.

“First of all, he learned he could make a mistake and get up and come back to win,” Davison said. “But more important, he learned a very important lesson. He learned in that fight that he needed to respect every opponent, whether they were big, small, fat or thin. If they're a professional-level athlete, they're a dangerous man. He learned not to underestimate anyone in the future.”

Cunningham has had a good career, but he doesn't punch remotely as hard as Wilder. With Wilder, there are very rarely second chances.

Ortiz made it back to compete after the first knockdown, but he is an obvious rarity.

“Fury has a way of slowing the pace down and he gets the fight at the level he wants,” Cooney said. “He did great that way with Klitschko. Wilder is going to want to be going 130 mph all the time and Fury's going to try to get it at 30 mph. The bad news for Tyson is that Wilder ain't Klitschko. We saw Klitschko get old that night. Deontay isn't old, and he's got stamina on top of his stamina. Tyson can try to slow it down, but Wilder's going to be coming constantly with that right.”

That seems like it will be the difference in the fight. Wilder has a lot larger margin for error. He can make mistakes and it's unlikely Fury will finish him. But if Fury makes a mistake, the fight will be over in an instant.

Fury's almost certainly going to be ahead on the cards whenever it ends, but Wilder's eventually going to find a way to land that right hand.

When it finds its home, Wilder will win by knockout and become the lineal champion. It's going to take a while, so say Wilder by TKO in the tenth round.