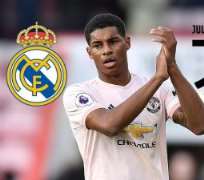 Juventus 'are compiling a dossier' on Marcus Rashford as they 'firm up their interest' in the Manchester United striker.

That's according to  the Times , who claim Juve are running checks on the England man's 'character and background' as they firm up their interest in a summer transfer.

United manager Jose Mourinho has often been critical of Rashford and the player has made only five Premier League starts this season, amid concerns his talent is being wasted in Mourinho's conservative setup.

However,  The Sun  claim Rashford won't be going to Turin at all. Instead he'll be joining Christian Eriksen in Madrid.

They report that Real plan an audacious '£90m double raid' with Rashford and Eriksen in their sights.

Madrid scouts have been at recent United matches but were thought to be eyeing Paul Pogba and Romelu Lukaku.

However, it is Rashford who was getting all the attention and the scouts were at Wembley as England beat Croatia and were impressed by the 21-year-old.

Real are also plotting an ambitious £40m offer for Eriksen, who only has 18 months left on his current contract.

Talks have reportedly stalled on a new deal and Real are willing to test Daniel Levy's resolve, although the Spurs chairman will likely hold out for at least double that much before entertaining a sale.