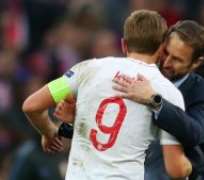 Harry Kane was described by England manager Gareth Southgate as “the best goalscorer in the world” after his dramatic winner against Croatia earned his side a Nations League Finals berth.

Kane’s late impact turned Sunday’s Group 4 meeting at Wembley on its head, the England captain involved in substitute Jesse Lingard’s equaliser before scoring the 85th-minute winner himself from close range.

England will now compete with Portugal and two other teams, who are yet to be decided, for the inaugural Nations League crown at the end of the domestic season.

Kane had not scored for England since the World Cup, where his six goals earned the Golden Boot but some flat performances in the knockout rounds saw Southgate criticised for not resting the striker.

However, a proud Southgate made it clear Kane’s importance to England cannot be underestimated after the Three Lions gained a measure of revenge for their extra-time World Cup semi-final loss by relegating Croatia to League B.

“I think Harry is the best goalscorer in the world frankly so you’re always loathe to take a player of his ability off,” Southgate told a news conference.

“Some people question decisions in the summer but he’s our main penalty taker and our leader.

“In 98 per cent of games his hold up play and everything is critical, he played a fantastic pass for Raheem [Sterling] in the first half.

“So we have huge belief in him and he is so hungry to lead the team further.”

Kane proved his class in the final third but, Andrej Kramaric’s deflected opener aside, England also impressed at the back, with inexperienced defenders Joe Gomez and Ben Chilwell earning Southgate’s praise along with teenage winger Jadon Sancho, who came off the bench.

“I think we knew to keep the hunger and challenge – there were things for us to talk about but you need competition for places,” Southgate added.

“We knew the level of our young players and we looked at Ben ahead of the summer and thought he was not quite ready but he started the season really well with Leicester.

“The younger ones have emerged so quick, Sancho so quickly an option from the bench, but we know the quality of the players. Gomez would have probably come with us in the summer [to the World Cup] had he been fit.

“We’re not afraid to put in a 21 and a 22-year-old at the back today. It’s easier to gamble on young forwards but those guys have been good enough with great quality and they’ll only improve with these experiences.”

Southgate and his squad can now look forward to competing for England’s first major international silverware since their only World Cup triumph in 1966.

“I am hugely proud of all the players and the staff because we’ve grown together and improved every step,” he added. “I think today was another big occasion, a big experience, plenty of pressure and expectation on the game but they coped well.

“In the first half we played so well and had good chances, second half we had to show another side and show character. We had five to 10 minutes after they scored with counter-attacks.

“I said to TV, we may be a new England but we scored from a long throw and a wide free-kick so maybe nothing changes!

“The connection with fans is so pleasing for me as I’ve not heard Wembley like that for years. We’ve give them some big days and nights this year and their energy helped us to get over the line in the big moments.

“Next year looks exciting to look forward to and all the players want to come with us, young players are desperate to be a part of it. The feeling round the team is powerful and we have to build on it.”