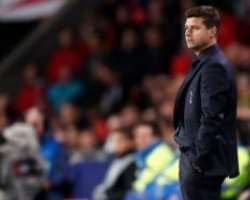 It feels like a defining moment for Tottenham Hotspur, as Mauricio Pochettino prepares for four games in eight days which could ultimately shape the direction of the club's season.

Spurs will face West Ham in the EFL Cup two days later, a potentially awkward game at Molineux against Wolves at the weekend, and then a critical Champions League tie with PSV Eindhoven on Tuesday week.

Pochettino could conceivably be out of two competitions by the middle of next week – and possibly even three if City extend their lead over them to five points – but there is a steely mood around the Spurs camp after their excruciating 2-2 draw in Holland on Wednesday.

They appear unlikely to progress to the knockout stages after picking up just one point and the wooden spoon of the Europa League beckons as they prepare to (finally) move into the new White Hart Lane next year.

Yet in the Premier League, this is still the most points Spurs have ever accrued after nine games. They have recovered from a stumbling start to move within two points of Guardiola's champions, despite the ongoing problems surrounding their stadium.

Spurs are fighting on three fronts in the space of one crucial week Credit: AFP

Erik Lamela, the midfielder, admits he has no idea why their form in Europe and the league has been so wildly unpredictable.

“The matches have been defined by very small details that have changed everything. We've not had much luck in the Champions League and I'm not trying to find excuses,” he said.

“We also did not manage to close down matches as we should have done in Milan and Eindhoven. And when you do things like that it becomes more difficult.

“The draw at PSV is not at all what we were expecting, but we have left that behind us. It is all about Manchester City now and we are all focused on them.”

Spurs were beaten twice by City last season but Lamela knows a victory will only fuel optimism that Pochettino can sustain a title challenge.

“Obviously if we win we're going to be a point above City and that would be ideal. They are a great team but this is a huge opportunity to get to the top, where we want to be,” he said.

Lamela cannot explain why Spurs’ form has been so erratic Credit: GETTY IMAGES

“The good thing is we're playing locally and have our people there supporting us. That's going to be really good and will help.

“We're going to go for the win. That's what we're seeking. We're going to try and stay on that streak of victories that we've been having in the Premier League.”

Spurs hopes will inevitably revolve around Harry Kane, who has seven goals this season despite suggestions that he has been struggling with fatigue after playing for England at the World Cup this summer.

And Lamela insists Kane deserves to be compared with City's Sergio Aguero as one of the Premier League's most potent strikers.

Aguero has etched his name into City history by becoming the club's all-time record goalscorer (he has scored 149 in the Premier League) but Kane is five years younger and only 36 goals behind.

“I think they're both incredible. Kun has proved through his whole career he's a great forward, a legend in football.

“Harry is much younger but what we're seeing from him, it's very promising and looking that he could become a legend as well. And as a mate, I just wish him the best in his career. It is a good question!”