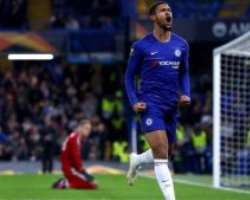 Chelsea head coach Maurizio Sarri believes he has a “tactical problem” in midfield after Ruben Loftus-Cheek impressed in the Europa League on Thursday.

Loftus-Cheek, 22, made the most of a start, scoring a hat-trick in a 3-1 win over BATE at Stamford Bridge.

But the England midfielder has made just two substitute appearances in the Premier League this season, and Sarri said only defensive improvement was likely to lead to more chances for Loftus-Cheek.

“He played very, very well. In the offensive phase he was wonderful,” the Italian told a news conference.

“I told him at the beginning of the season I thought he was a very good player. Now I think the same, but now he’s more suited to my football, he’s improving.

“It’s very difficult for me to put in the starting XI two offensive midfielders at the same time. I hope to be able to do it in the future.

“I need the cooperation of the players of course. I need an improvement in the defensive phase.”

Ross Barkley has only made three league starts for Chelsea this season, with Sarri’s men unbeaten in 13 games since their Community Shield loss to Manchester City.

Sarri said using Barkley and Loftus-Cheek together may be an option in the future, but only if they improve.

“As I said before, I have a tactical problem with the midfielders because of their characteristics.

“We need to work and they have to improve in the defensive phase. In the future I may be able to put Barkley and Loftus in the same starting XI.”