Di Maria stunner rescues a point for PSG against Napoli 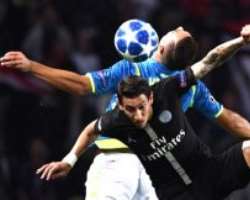 Angel Di Maria's stunning goal in injury time allowed an out-of-sorts Paris Saint-Germain to snatch a 2-2 draw with an impressive Napoli side in their Champions League clash on Wednesday.

PSG looked beaten until Di Maria curled home in the third minute of time added on, salvaging a point from a game in which they had been second-best for long spells.

Prior to that it looked as though goals from Lorenzo Insigne and Dries Mertens, either side of a Mario Rui own goal, would give Carlo Ancelotti's Napoli the victory in the French capital.

Instead, the biggest beneficiaries of this result are surely Liverpool, who move to the top of Group C after easing to a 4-0 win over Red Star Belgrade in the night's other game.

Despite the late blow, Napoli can still be the happier of the teams with a point, while the ambitious PSG's own hopes of reaching the knockout rounds and finally making a major impression in this competition remain in the balance.

It was an accomplished away performance from Napoli, but PSG's all-star attack of Neymar, Kylian Mbappe and Edinson Cavani all toiled for much of the evening, which was a world away from the strolls they so often enjoy domestically.

They have won all 10 of their games in Ligue 1, a record-breaking start to a French season that has led to new coach Thomas Tuchel being showered with praise.

However, doubts had already been raised about their true capabilities when they performed poorly in losing 3-2 to Liverpool at Anfield.

Tuchel did not deserve to be judged on that one game, but once again his team were exposed by a leading European side, with Ancelotti revelling in his latest return to Paris.

Ancelotti coached PSG to the Ligue 1 title in 2013 before leaving for Real Madrid, and he first returned to the Parc des Princes a year ago in charge of Bayern Munich only to be sacked by the German giants after a chastening 3-0 defeat.

This time his Napoli team were excellent for long spells, fresh from beating Liverpool in their last European outing. – Tuchel forced to take action –

They nearly took the lead midway through the first half when Mertens guided a Mario Rui cross against the bar.

The warning was not heeded by PSG, and Napoli went ahead just before the half-hour mark, Jose Callejon's superb pass in behind finding Insigne, who finished beautifully over the advancing Alphonse Areola.

It took PSG until seven minutes before the interval to really threaten thanks to a combination of their two superstar forwards — Neymar released Mbappe, but the France World Cup winner saw his shot saved by David Ospina.

Tuchel knew action was needed and he switched to a back three for the second half, taking off struggling left-back Juan Bernat and replacing him with another centre-back in Thilo Kehrer.

Paris duly stepped up the pressure and were rewarded with the equaliser in the 61st minute, although there was more than a touch of good fortune about the goal.

Mbappe exchanged passes with Neymar before releasing Thomas Meunier, whose low ball in from the right was turned into his own net by Mario Rui, the Portuguese defender.

Napoli shook off that blow and retook the lead when Mertens stabbed home from close range in the 77th minute after Marquinhos had blocked a shot from Fabian Ruiz.

That appeared to be that, but just as PSG looked defeated, substitute Julian Draxler laid the ball off to Di Maria in the 93rd minute and he curled a superb strike high into the top-left corner from 25 yards.