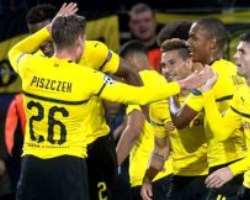 Borussia Dortmund stunned Atletico Madrid with a 4-0 thrashing on Wednesday to move to the verge of the Champions League knockout stage, as English teenager Jadon Sancho scored his first goal in the competition.

It was the heaviest Champions League defeat ever suffered by Diego Simeone in seven years as Atletico head coach and put Dortmund top of Group A after both teams had previously beaten Club Brugge and Monaco.

Axel Witsel gave Dortmund the lead at Signal Iduna Park when his first-half shot took a wicked deflection, before Raphael Guerreiro, who scored twice in the second half, and 18-year-old Sancho came off the bench to grab the other goals.

Dortmund were without in-form Spanish striker Paco Alcacer, who has scored seven times in just four Bundesliga games, with a leg injury, while Diego Costa returned to partner Antoine Griezmann up front for Atletico.

This was a typically tense European affair, played at a frantic pace between two strong teams eager to focus on attacking football with neither defence allowing many clear chances.

With 35 minutes gone, Dortmund lost midfielder Thomas Delaney with a foot injury and the Dane was replaced by Mahmoud Dahoud, who played a hand in the opening goal.

After a determined run by US midfielder Christian Pulisic, 20, Dahoud carried on the move, before the ball eventually fell to Witsel, whose shot took a big deflection before finding the net.

Atletico boss Simeone brought on a fresh pair of legs in midfield for the second half, taking off Thomas Partey and bringing on Rodri.

The visitors showed how dangerous they can be by driving forward with real purpose and midfielder Saul Niguez crashed a shot off the woodwork on 53 minutes with Dortmund goalkeeper Roman Burki well beaten.

Borussia were living dangerously, but a good spell midway through the second half, with Witsel in the thick of things, turned the game the hosts' way.

Achraf Hakimi on loan from Real Madrid, got in the way of a Marco Reus run into the area, but the 19-year-old soon made amends by laying on the second goal with 17 minutes to go.

The left-back got in behind his man and fired in a low cross that Reus missed, but Guerreiro stabbed past Oblak.

At the other end, Burki only denied Atletico winger Angel Correa, on for Niguez, with the help of the post.

Dortmund sealed the win when Hakimi did the damage again, charging into the area and teeing up Sancho to tap home their third goal on 83 minutes.

And it turned into a rout when Guerreiro snapped up a loose pass from Felipe Luis and fired past Oblak with a minute remaining.