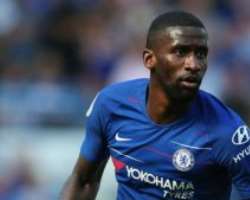 Antonio Rudiger is set to earn a pay rise and a contract extension at Chelsea after an impressive start to the season under Maurizio Sarri, Goal understands.

The 25-year-old has established a solid partnership with David Luiz this season and scored the opening goal in last week’s 2-2 draw with Manchester United at Stamford Bridge.

The Germany international has more than three years left on his current contract since joining from Roma last year in a deal that could cost Chelsea as much as £34 million ($44m) based on add-ons.

However, the intention is to reward his good form and increase his current £100,000-a-week earnings to come closer to some of the bigger earners at the club.

Rudiger has featured in 11 of Chelsea’s 13 games so far this season as Sarri’s side remain unbeaten going into Thursday’s Europa League clash with BATE Borisov.

He has recently outlined his happiness at Chelsea and feels the faith he is being shown by Sarri and the coaching staff is helping with his performance level.

“I feel extremely comfortable with Chelsea, and I feel the confidence of the coaching staff, the fans, the entire club, every day, and that shows on the pitch as well,” Rudiger told  SID .

“We play possession football under Sarri, which is very important to me, so we are always relatively high as a defence, but once we are passed, I still have my speed to be able to intervene.”

Rudiger's goal against United was his first for Chelsea in 2018 and he was delighted to be able to contribute from an attacking point of view, saying: “I've had some good chances to score myself this season and this time it finally went in.”

Eden Hazard and N’Golo Kante are also among those who Chelsea are keen to tie down, with the Belgian superstar having less than two years on his current contract.

Marcos Alonso recently renewed his deal until 2023 , but Callum Hudson-Odoi is another who the Blues are aiming to secure on a new deal.