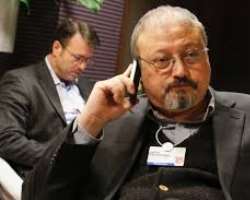 One of 15 Saudi men sent to confront Jamal Khashoggi was seen on surveillance video walking around Instanbul wearing a fake beard and the journalist's clothing after he was killed,  CNN reported  Monday.

Mustafa al-Madani, allegedly a member of a hit team sent to kill Khashoggi, arrived at the Saudi consulate in Instanbul on Oct. 2 around 11 a.m., CNN said, citing Turkish investigators.

Khasoggi reportedly entered the building at 1:14 p.m. while his fiancee waited outside. Shortly before 3 p.m., surveillance footage recorded Madani exiting the consulate through the back door, along with an accomplice, in the journalist's blazer, shirt and trousers, CNN reported.

Madani, 57, is of similar height, age and build as Khashoggi, and was likely used as a decoy, Turkish officials told CNN. The surveillance footage captured the Saudi operative donning a fake beard and glasses upon exiting the consulate, which he was not wearing when he arrived hours earlier.

Madani's role as an alleged Khashoggi body double is the latest in the evolving investigation into the killing. The Washington Post columnist visited the Saudi consulate in Instanbul on Oct. 2 to obtain documents for his upcoming wedding. He never reemerged.

Turkish officials contend Khashoggi was killed and dismembered inside the consulate by Saudi operatives hours after he arrived. Saudi Arabia, in shifting statements, initially claimed no knowledge of his whereabouts, then claimed Khashoggi was unintentionally killed in a fistfight at the consulate.

Though President Donald Trump has been reluctant to speak out against Saudi Arabia and its de facto leader Crown Prince Mohammed bin Salman,  lawmakers on both sides of the aisle have expressed significant doubt  over the kingdom's account.

Sen. Bob Corker (R-Tenn.), during an appearance Sunday on CNN's “State of the Union,” said Saudi Arabia had “lost all credibility as it relates to explaining what happened” to Khashoggi and believed the crown prince was involved.

“Obviously, if [the crown prince] has gone forth and murdered this journalist, he's now crossed the line, and there has to be a punishment and a price paid for that,” said Corker, chairman of the Senate Foreign Relations Committee. “Do I think he did it? Yeah. I think he did it.”

A senior Turkish official told CNN the surveillance footage of Madani in Khashoggi's clothing adds evidence that the journalist had been executed.

“You don't need a body double for a rendition or an interrogation,” the unnamed official told CNN. “Our assessment has not changed since Oct. 6. This was a premeditated murder and the body was moved out of the consulate.”

Head over to CNN to  read the full report  on the surveillance footage.