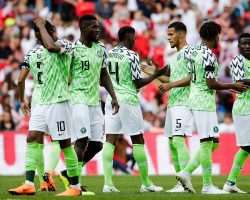 For the second game in a row, Odion Ighalo stole the headlines as  Nigeria boosted their hopes of reaching the Africa Cup of Nations with a 3-2 victory over Libya  in Sfax.

The Super Eagles hitman followed up on his hat-trick in the first match against the North Africans on Saturday with a double – including a late winner – as Gernot Rohr made it three consecutive qualifying victories.

The three points take Nigeria up to top position in Group E, and in pole position to qualify for Cameroon 2019.

POSITIVES
Another goalscoring performance for Ighalo can never be a bad thing.

The striker has endured some torrid times from fans, and certainly deserves the accolades that come with this turnaround.

More importantly, Nigeria are now in a position where they would struggle not qualify for Cameroon!

It would take a calamity of gargantuan proportions for them to lose two straight games when they only need a point from two games, one of those being at home to Seychelles.

Better than all that, for the first time in a long while, and certainly under Gernot Rohr, the Super Eagles played truly exhilarating football for nearly 40 minutes of the first half.

NEGATIVES
What has happened to Francis Uzoho?
The goalkeeper looked like a rank amateur for most of the game, and was guilty of giving away opportunities to the Libyans.

Wilfred Ndidi also got himself needlessly booked and will now miss next month’s showdown against Bafana Bafana.

Manager rating (out of 10)
7 – Gernot Rohr
Who else gets the credit for that sexy half of football but the manager!?

The players showed off skill, awareness and positioning as they threatened to overrun their hosts and run up a cricket score.

However, they were also guilty of ceding territory to their opponents towards the end of the half, and Rohr, as is becoming typical, held off on his substitutions for too long.

Player Ratings (out of 10. Players introduced after 70 minutes get no rating)

GK Francis Uzoho 4
If Uzoho looked a little nervy in the first fixture of this tie, in Tunisia he was decidedly panic-stricken.

Whatever is going on with him needs to be sorted out…quickly!

He was guilty for both goals; having no command of his area for his first, and spilling a routine low cross for the second.

DF Ola Aina 6
While he did a solid job defending, he was far too conservative.

Had space in front of him on more than one occasion, but chose to pass rather than drive into it.

He allowed the ball to bounce, and then conceded free kick that led to the goal. He also lost his man for the header on the first goal.

DF Jamilu Collins 7
The left-back keeps improving match by match, and this was a much more confident performance from him.

He combined well with the forwards in front of him, whether it was Ahmed Musa or Samuel Kalu, and bombed forward at every opportunity.

Collins broke up a counter then set Odion Ighalo on the way to the forward crossing to Musa for the second goal.

He did lose one sliding tackle that almost led to danger, but that was about it. It’s hard to see him losing his spot now.

Alex Iwobi  BEN STANSALL/AFP/Getty Images
DF Leon Balogun 8
On a day when the midfield looked out of sorts, Balogun took responsibility to bring the ball out of defence every occasion he could.

This led to a few heart-in-mouth moments, but worked out for the best.

He won more aerial balls than he did last game, but that remains a concern, and there was one particularly high-risk tackle which could have led to a goal.

DF William Troost-Ekong, 8
Once again, the Udinese man showed how important he was for the team; strong, quick and decisive when required.

However, he must also take some responsibility for not organising the defence enough to lose two headers – for the first goal – and confusion that led to the second.

MF Oghenekaro Etebo, 6
It was a disappointing day for Etebo. He won ball after ball in the first half, initiated attacks, and stopped the Libyans in their tracks.

However, his performance tapered off in the second half, as he gave away the ball way too often and was justifiably subbed for a fresher John Ogu

MF Wilfred Ndidi 7
Like Etebo, he excelled in those opening fantasy football minutes, and even had the confidence to rove forward and get himself in goalscoring positions.

However, his performance dropped, and he picked up a needless booking that now rules him out of next month’s game against South Africa.

A FIFA ban would have seen the Super Eagles miss the Afcon qualifiers in September.  IAN KINGTON/AFP/Getty Images

MF Alex Iwobi 8
We may just look back to this day, perhaps, as the day Alex Iwobi snatched the playmaker role from Mikel permanently.

He started slowly, but his endless running, making himself available for the ball, finding spaces to thread passes, and just keeping things ticking over was just what the Super Eagles needed

He switched places with Kalu more than once, and did superbly to stay on his feet, dig out Ighalo’s cross from underneath his foot and drill home from close range.

FW Samuel Kalu 6
Kalu’s game was nowhere near the outstanding performances of his debut, and even fell short of his underwhelming display in the second match against Libya.

He found it tough to beat his man, even when he switched wings.

To his credit, he never stopped trying, and to be fair, he should have been subbed off earlier than the 80th minute.

FW Odion Ighalo 9 (MOTM)
Ighalo looks a man reborn.
He led Nigeria from the front, finished off a dreamy Nigeria passing move, then started the charge and supplied the cross for Musa’s goal.

The forward saved his best for last, latching onto a Musa knockdown, sending both centre-backs the wrong way with a drop of the shoulder before firing home a left-footed winner.