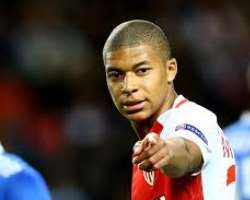 PARIS (AP) — Three months removed from scoring in the World Cup final and still three months shy of his 20th birthday, Kylian Mbappe is already a serious title contender for the Ballon d’Or as the best soccer player in the world.

The Paris Saint-Germain striker helped his case over the weekend, becoming the youngest player in the past 45 seasons to score four goals in a single French league game.

“The Ballon d’Or? Why not? I don’t rule out anything,” Mbappe said after scoring the four in a 14-minute span on Sunday as PSG extended its unbeaten start to nine wins with a 5-0 rout of Lyon.

On Monday, Mbappe was included in the 30-man list of contenders for the Ballon d’Or awarded every year by France Football magazine. The winner will be announced on Dec. 3.

Mbappe, who won the best young player award at the World Cup in Russia after becoming the first teenager to score in a final since Pele in 1958, delivered on Sunday his most efficient display since joining PSG.

After Neymar put the hosts in front from the penalty spot early in the game, Mbappe single-handedly won a fiercely contested match at the Parc des Princes, which saw both teams reduced to 10 men in the second half.

L’Equipe newspaper summed it up with a picture of Mbappe celebrating one of his goals in Neymar’s arms with the headline: “Here, it’s Mbappe,” a reference to PSG’s motto “Ici, c’est Paris” (“Here, it’s Paris”).

“For me he’s a phenomenon,” Neymar said. “I hope it will continue like that for several years because football will thank him.”

Neymar joined PSG from Barcelona to flee from the shadow of Lionel Messi but could become eclipsed by Mbappe.

Following his four-goal showing, Mbappe is tied for the French scoring lead with eight, alongside Neymar.

Neymar was out injured for a long spell last season and had a disappointing World Cup. He is not among the favorites for the Ballon d’Or. But Mbappe delivered breathtaking performances in Russia and has been consistent throughout the year.

The only stain on his record so far this year is a red card — the second of his PSG career — he received during injury time on Sept. 1 in a 4-2 win at Nimes, which resulted in a three-game ban. That day, Mbappe reacted wildly to a challenge from behind, shoved his opponent angrily to the ground, and had to be restrained by teammates.

Mbappe has since made amends. Not yet the equal of Cristiano Ronaldo and Messi, who have shared the past 10 Ballon d’Or awards, the teenage wonder has a good chance to dethrone the pair in December despite the fierce competition from the likes of Luka Modric and Antoine Griezmann, who are also among the favorites.

“If he continues at this level, he can win it in any year,” Mbappe teammate Angel Di Maria said. “We see in each of his matches the potential that he has, he exploits it every time, even if he is only 19.”