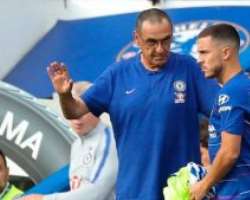 Maurizio Sarri played down Chelsea’s title chances after their 1-1 draw with Liverpool on Saturday.

It looked as though Chelsea were set to go level on points with Manchester City at the top of the table after Eden Hazard’s 25th-minute strike put them ahead.

Chelsea 1-1 Liverpool
As it happened
Sarri said ahead of the match that  Liverpool are “ready now to win the Premier League”  and his view was not altered by the result at Stamford Bridge.

“No, I think they are a step forward but I think also that we are closer than I thought one week ago,” he said.

“The first two places, as you know, for me, is going to be very difficult because Manchester City and Liverpool are a step forward on us. So it is very difficult. But I think we can fight for the Champions League.

“I am disappointed because they scored in the last two minutes but in the end I am really very happy, first of all with the performance and I think also that the draw may be the right result. The match was wonderful.”

Hazard’s goal was his sixth in the Premier League and Sarri still thinks he can hit 40 this season.

“I think that he is able to score 40 goals so he has to score another 33. I think so and he is trying to do it. But I am really very happy with the defensive performance today, especially in the second half.”

Asked whether Chelsea are too reliant on Hazard, Sarri added: “Maybe but I think at the end of the season we can have four or five players with over 10 goals so it is not only Hazard.

“Of course, Hazard is the first but I think Pedro, Willian and [Alvaro] Morata will be able to score more than 10 goals in the season. Pedro [already] has three goals.”