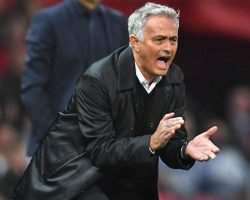 United lost to second-tier Derby County in the League Cup on Tuesday  before a humbling afternoon at the London Stadium.

A third Premier League defeat in just seven games means this is United’s worst start to a season for 29 years.

A fifth-minute strike from Felipe Anderson and a Victor Lindelof own goal put West Ham 2-0 up before half-time.

Second-half substitute Marcus Rashford pulled a goal back for United before Marko Arnautovic sealed the win for the home side.

Mourinho’s relationship with star midfielder Paul Pogba will once again be in the spotlight after the Frenchman was substituted in the 71st minute.

Earlier this week, Mourinho stripped the World Cup-winning midfielder of his vice captaincy role before footage emerged which appeared to show the two having a disagreement on the training ground.

Jose Mourinho was helpless to prevent his team losing for the third time this season.

Mourinho was stopped from taking any questions on Pogba by United’s press officer.

“I think we need a good start, and we didn’t get that good start,” Mourinho told a press conference.

“After the result on Tuesday, the team needs positive things, positive feelings.”

He also pointed out a possible offside in the build up to Anderson’s opener, although he did concede his team were “not good in transition, not good when we lose possession and the other team counterattack.”

After winning the Europa League, and League Cup in first season at United, Mourinho led the Red Devils to a second-place finish in the Premier League last season — albeit 19 points behind fierce local rival City.

Now in his third season at the club, Mourinho has been heavily criticized for poor results and for the team’s conservative style of play.

Elsewhere, Liverpool’s winning run was halted by Chelsea in an entertaining 1-1 draw at Stamford Bridge.

Jurgen Klopp’s Liverpool has been the early Premier League pacesetter, winning each of its opening six matches.

But a first defeat looked likely after Eden Hazard’s first half goal, his second against Liverpool in a matter of days after  scoring the winner in Wednesday’s League Cup match between the two teams .

Liverpool threw everything at Chelsea in search of an equalizer, with Xherdan Shaqiri shooting wide from close range when it looked easier to score.

The breakthrough came in 89th minute when substitute Daniel Sturridge fired in a sublime 25-yard strike moments after coming onto the pitch. It was Sturridge’s 50th Premier League goal for the Reds.

The result means Liverpool sits second, level on points with leader City, with Chelsea in third and still unbeaten.