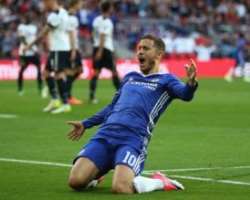 ast Jordan Henderson, Fabinho, a nutmeg on Roberto Firmino. A quick one-two with Cesar Azpilicueta and off again. Into the penalty area, away from Naby Keita, his arms out trying not to foul him, across Alberto Moreno and a fierce, angled, right-foot drive to leave goalkeeper Simon Mignolet grasping at thin air as the ball passed him by. The net bulging. Then tearing off in celebration; tongue out; a wide grin on his face; arms outstretched; a knee slide in front of the Anfield Road stand.

This was some way for Chelsea to knock Liverpool out of the Carabao Cup; a goal to gild any occasion, to crown any game. A goal out of this world or, rather, a world-class goal from a player determined to fulfil his potential as one of the very, very best.

Eden Hazard produced a remarkable cameo, after coming on as a second-half substitute, and there is a new-found determination to him this season. Maybe it was going so close in the World Cup with Belgium, maybe it was not securing his move to Real Madrid, maybe it is the energising effect of a new and creative manager in Maurizio Sarri. Maybe, at 27, Hazard believes his time is now.

It was going to take something special to stop them after seven straight wins and Hazard did just that as he ended their 100 per cent start to the season ahead of both sides meeting this weekend in the Premier League. The importance of this result or, more likely, the dramatic comeback and Hazard's influence will soon become apparent, but this was some contribution.

H e arrived on the pitch to see Daniel Sturridge score his own brilliant goal, a wonderful scissor-kick, which appeared set to win Liverpool this tie after Chelsea goalkeeper Willy Caballero had denied them with a series of saves. And then Hazard turned it around. Turned it on its head. He even delivered the free-kick from which Chelsea equalised, although there was controversy around that with Jurgen Klopp claiming it should have been disallowed.

Firstly, the Liverpool manager argued, it was not a foul by Keita on Victor Moses out on the touchline and then, after Ross Barkley's header had been parried by Mignolet and Emerson had stabbed home the rebound, Chelsea players were offside. Three of them, in fact, Klopp said. Even so, after a long consultation with the video assistant referee (VAR), referee Kevin Friend allowed the goal.

“I don't think I have the Liverpool glasses on my nose but you have two players who are clearly offside,” Klopp claimed, pointing the finger at Alvaro Morata and Gary Cahill. “They do not touch the ball, I know that, but they block. And then Barkley has the header and he's offside, not much, but offside.”

S arri sent his assistant, Gianfranco Zola, the deliverer of many a fine goal himself in Chelsea blue, to speak. “He is one of the best players in the world, for sure,” he said of Hazard, a kindred spirit. “What he has done today, that goal is proof of that. He's getting better and better.”

Hazard certainly is and Chelsea provided proof that there is something special brewing under Sarri just as we know that is happening at Liverpool with Klopp who showed his frustration in upbraiding Xherdan Shaqiri at full time. There is a great desire for Sarri to win a first trophy at Chelsea and he claimed a very big scalp.

Yes, there were a raft of changes with four Liverpool players making their first start of the season and Chelsea also much altered, and although they settled more quickly – with the painfully out-of-sorts Morata missing two clear chances as he was thwarted by Mignolet – the best opportunities eventually fell to Liverpool. C aballero produced his first good save to push away Keita's powerful shot, then he stopped a Sadio Mane header and then, 25 seconds into the second half, he did enough to unbalance Sturridge after he latched onto a poor back-pass by Andreas Christensen. Clear on goal, Sturridge rounded Caballero, who got a hand on the ball, but even so the striker had to do better than fire wide of the unguarded net.

Chelsea made two more errors. Firstly Barkley's back header went straight to Mane who, at full stretch, got a shot away but Caballero diverted it wide with his legs. Then Azpilicueta carelessly lost possession and it was fed to Keita who turned quickly and powered in a rising cross-shot that Caballero pushed up into the air. Sturridge met it and executed a wonderfully-acrobatic volley.

Liverpool were ahead but Chelsea responded with Emerson pulling them level. It stung the home side with Sturridge going close as he sent in a dipping shot from 25 yards, after being teed up by Firmino, only for it to strike the crossbar and bounce over.

That, too, would have been some goal. But it was as nothing to Hazard's run and finish. “Saturday will be a completely different game. I hope it is as beautiful as today,” Zola later said. It will have to be some game to beat that goal.