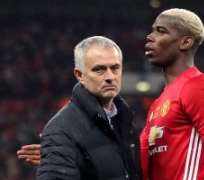 Paul Pogba's fractured relationship with Jose Mourinho hit an all-time low on Tuesday after the Manchester United manager told the France midfielder in front of team-mates that he will never captain the club again.

Mourinho broke the bombshell news to his stunned squad at United's Carrington training ground after reacting furiously to Pogba's criticism of the team's tactics at Old Trafford in the wake of Saturday's 1-1 draw against Wolverhampton Wanderers.

The United manager is thought to have accused Pogba of believing he is bigger than the club as the Portuguese's patience with his club record £89 million signing finally snapped.

The extraordinary turn of events puts the two biggest personalities at Old Trafford in direct confrontation and creates a huge headache for Ed Woodward, the club's executive vice-chairman.

Woodward will be under pressure to back Mourinho's stance over Pogba, but doubts over whether the manager will still be in charge beyond the summer are likely to prove a complicating factor in terms of the midfielder's own future at Old Trafford.

United have previously insisted Pogba is not for sale but the collapse in his relationship with Mourinho may intensify his desire to join Barcelona, who have been courting the 25-year-old since the summer and who could test United's resolve to keep the player in the January transfer market.

Pogba had claimed after the Wolves game that United needed to attack more at Old Trafford and offer more movement upfront in an apparent dig at Mourinho's tactics, even though it was from his mistake early in the second half that the Midlands club equalised.

Pogba was in outspoken mood after the home draw with Wolves Credit: AFP

Having fuelled the uncertainty over his future amid his eagerness to move to Barcelona and done little to mask his troubled relationship with Mourinho, Pogba's remarks at the weekend proved the final straw for the manager as he sought to reassert his authority. The former Juventus midfielder had stood in as United's skipper on three occasions this season when club captain Antonio Valencia has been injured.

A Carrington source said: “Jose told the players that Pogba will not be the captain because he doesn't represent what a captain is and Manchester United is bigger than anyone.

“The players were happy with that decision and the reasons behind the manager's decision.”

Mourinho had already taken a thinly veiled swipe at Pogba in his programme notes to preview Tuesday night's Carabao Cup tie against Derby County before his dressing down of the player in front of the rest of the squad.

“I hope we can look back on the game against Wolves as an important lesson,” Mourinho wrote. “A lesson I repeat but a lesson some boys are not learning – 95 per cent isn't enough when others give 101 per cent.”

Pogba had  suggested United were not staying true to their attacking traditions post-Wolves . “I'm not the manager, I cannot, like, say that but … obviously we should show more option of playing but I cannot say that because I'm a player,” Pogba said. “That's my way of thinking – we should move better, we should move more, yeah.

When asked what was stopping United from doing that, Pogba said: “I can't tell you because I'm a player. It's not me.”

Pogba claimed on Monday that his words had been twisted but Mourinho did not see it that way and has made his displeasure quite clear to the player.

Mourinho's scolding of Pogba coincided with Woodward offering his support to the manager as United announced a profit of £44.1 million for the 2017/18  financial year on record revenues of £590 million. But Woodward also left Mourinho under no illusions about the importance of winning and blooding home-grown talent.

“Everyone at the club is working tirelessly to add to Manchester United's 66 and Jose's 25 trophies – that is what our passionate fans and our history demands,” Woodward said.

“It is easy to get caught up in the game-by-game fluctuations of our season or even the relatively minor pieces of business and industry news, I would like to take this opportunity to take a step back and look at the bigger picture.

“We are the biggest sports team in the world as measured by the number of fans. We know that position is one that requires continued effort and investment to maintain. Our board, our investors and everyone at the club are in line with the fans on what we need to do on the pitch and that is to win trophies.

“That is one of the reasons why we hired Jose Mourinho and we have already won three with him.”

Mourinho continues to enjoy the backing of the United board despite the ongoing Pogba saga Credit: AFP

Woodward reiterated United's ability compete for the best players in the transfer market – the club have forecast revenues of between £615 million and £630 million for 2018/19 – but also underlined the importance of a clear pathway to the first team for academy talents.

“Off the pitch it is clearly important to drive the business forward giving us the financial muscle to compete in the highly competitive transfer market,” he said.

“This allows us to continue to blend world class purchased talent with our continued development of top academy graduates.

“Our academy continues to be a huge source of pride in delivering talent for the first team with materially increased investment in recent years.”

The financial results also showed that United's wage bill has ballooned to almost £300 million following “players salary uplifts” brought about by the club's return to the Champions League last season, as well as the arrival of Alexis Sanchez from Arsenal in January in a £500,000 a week deal.

The 12.3 per cent jump in wages to £295.9 million means United now have the second highest earning squad in Europe behind Barcelona, whose 2016/17 wage bill stood at £336 million