Richarlison: I used to have Neymar's haircut – now I'm doing 'pigeon dance' celebrations with him 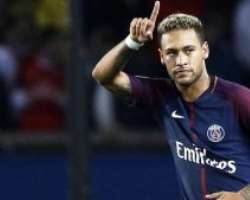 Everton striker Richarlison returned from international duty with a cherished possession and a phone full of inspiration.

First, there is Neymar's Brazil shirt, which will be framed and strategically placed to display its inspiring message.

Even more valuable is the addition to the compilation video the 21-year-old studies before every match, his two goals against El Salvador played on a loop alongside those of his heroes.

“I have my goals for Brazil on my phone now. On the flight back from New York to Liverpool, I watched it about 50 times,” says Richarlison.

“Whenever we are en route to the game on the bus I am always watching the goals of Ronaldo [the Brazilian], Adriano and Neymar to get inspiration. Then when I am on the pitch I try to replicate what they do. I will watch it on the way to the game [on Sunday] and I also watch some of my own goals now to see the good things I have done as a player.”

Richarlison used to sport a Neymar hairstyle growing up

Overnight, Neymar was transformed from idol to team mate, although it is understandable Richarlison regresses into a giddy child when revealing his admiration for the Brazil icon once extended to mimicking his hairstyle. A photograph of Richarlison – then aged 12 – sporting the Neymar mohawk is offered in evidence.

“I didn't quite pull it off because I didn't really have the right hair products,” says the forward.

“It would stay up for five minutes and then just flop down, so it didn't really work.

“I did tell him about the haircut. I remembered and during lunchtime one day I told him and this made the whole room fall about laughing. They thought it was hilarious. Neymar is an idol of mine, he's been an idol of mine since my childhood. I've always followed his progress, always tried to mirror myself in the way he plays. Playing with him was a really happy experience, it was great to have played alongside all these world-class players.”

International success was especially rewarding given how often Richarlison was warned against a football career.

“After the game I went into my room and reflected on things. I watched the goals back and I was thinking how that three or four years prior to that I was living in my hometown, Espirito Santo,” he said.

“I thought about the problems I had growing up, how I prioritised football over school but people were telling me I wouldn't make it, that it wasn't possible. The thing is I did make it and I have got to where I have got by my own will and determination.

“Some of my friends said I wouldn't have a future in football, as did some of my family. But I still believed in the potential I had and I wanted to chase my dreams. My mum [Vera Lucia] would tell me that I needed to get a proper job, but I didn't want to be anything other than a footballer. This led to some tension and frustration between us. It was something I dreamed of doing and I fought until the very end.

“My dad [Antonio] believed in me more than anyone and I think he is the proudest I made my debut for Brazil. Now I am playing and scoring goals for the national team. The first goal I scored for Brazil will live with me forever.

Amid the personal accomplishment, there is a hint of guilt at the timing.

Richarlison says he has learned from his red card at Bournemouth Credit: Getty images

Richarlison starred for his country while his club lamented his absence. He returns from a three-game ban this weekend.

“I went to see the manager and apologised.  Being sent off [at Bournemouth]  meant my team-mates were left in the lurch,” said Richarlison.

“What happened was my decision, I got sent off because of something I did on my own and I know how hard it is for a team to play with just 10 men. It was a strange feeling when I went into the dressing room because I'm not an aggressive player – it's not what I'm like. The red card was an upsetting event for me. I've learned from it and I will make sure it won't happen again.

“It has been hard for me to not be playing. I was in the stadium watching the game on Sunday and I was watching my team-mates give their all, wishing I could be alongside them doing the same.”

Given the toils and limitations of Cenk Tosun and Oumar Niasse, there are suggestions Richarlison will be used more centrally to resolves Everton's striker problem.

“I started my career as a No 9, I know how to play as a No 9. If Marco Silva needs me in this position then I can play in it or wherever he would like me to play,” he says.

Another goal at The Emirates might also provoke the 'pigeon dance' celebration shared with Neymar last month, widely circulated on social media.

“It's something we organised in training. He's a fan of that dance and he said if we scored in the game we would do the celebration,” says Richarlison, while clarifying his imitation of the Brazilian star now goes both ways.

Richarlison took part in a coaching session with Everton in the Community's pan-disability football team this week. The disability programme delivered by the Club's official charity is one of the largest and most respected in Europe and provides football and physical activity opportunities to over a thousand disabled children and adults each year. For more information visit  www.evertonfc.com/ community .