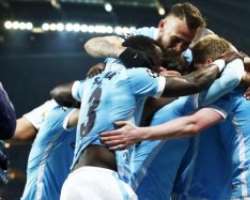 Manchester City manager Pep Guardiola says he never doubted Leroy Sane’s quality after he opened the scoring in the win over Fulham, but reminded the winger he must stay professional.

Sane, making his first league start for Guardiola’s side this term, netted after one minute and 36 seconds as the defending champions maintained their unbeaten start to the season.

David Silva doubled the hosts’ lead before the break, with Raheem Sterling all but securing the win two minutes into the second half.

A fourth win in five games keeps City within touching distance of league leaders Liverpool and Chelsea, who have taken maximum points so far.

Guardiola said he was impressed by 22-year-old Sane’s performance at Etihad Stadium, having restricted the Germany international to substitute appearances before the international break.

“We never had doubts about Leroy’s quality,” said the Spaniard. “He shows us many times in the last season and today he played again so good.

“We cannot forget sometimes this kind of thing happens, he is 21, 22. Sometimes he has to realise what, like a professional, he has to do.

“I am delighted for his performance and so confident.”

City were rarely troubled by the newly promoted Cottagers, restricting the visitors to handful of half chances at Etihad Stadium.

The hosts, perhaps with one eye on Wednesday’s Champions League opener against Lyon, eased off the pace in the second half but could have added to their lead with a number of opportunities falling to substitute Gabriel Jesus. Sane starts as Silvas star

Sane enjoyed a glittering season as Manchester City won the title last term, scoring 10 goals and proving one of Guardiola’s main attacking outlets, but he has been restricted to a spot on the bench so far this campaign.

It took the winger, who also surprisingly missed out on a place in Germany’s World Cup squad in the summer, less than two minutes to find the net on his return.

The hosts punished Fulham’s Jean Michael Seri for giving the ball away in midfield as Fernandinho broke forward and teed up 22-year-old Sane inside the six-yard-box.

It was the quickest Premier League goal of the season so far and the culmination of a good few days for Sane, who said after the game he became a father this week.

City’s only dropped points this season came at newly promoted Wolves but, having not lost at home to a promoted team in 11 years, they were always in complete control against Fulham and doubled the lead on 20 minutes.

Bernardo Silva’s good work down the left was eventually finished off by David Silva’s half volley that struck the bar on its way in – it was the Spaniard’s 50th Premier League goal, becoming the fifth City player to reach that landmark after Sergio Aguero, Yaya Toure, Carlos Tevez and Edin Dzeko.

Sterling had also hit the bar in the first half as he and Sane caused problems out wide, but the England forward got his reward for a strong performance within two minutes of the restart as he tapped in from Aguero’s low cross. Learning curve for Fulham

Fulham boss Slavisa Jokanovic said before the match that while his side wanted to use “similar weapons” to City, they must follow their own style of football.

The visitors brought two attacking full-backs into their line-up with Cyrus Christie on the right and teenager Ryan Sessegnon, often utilised as a winger, making his first start as a left-back since before Christmas.

But that left Fulham’s central defenders exposed, with City exploiting the space left behind by 18-year-old Sessegnon as Aguero set up Sterling with a low cross from the right for City’s third.

Fulham, promoted via the play-offs last season, looked threatening in the rare spells they were able to bring wide forwards Andre Schurrle and Luciano Vietto into the game, with World Cup winner Schurrle forcing a smart save from Ederson in the first half.

However, prolific forward Aleksandar Mitrovic, who has scored 24 goals for club and country in 2018, remained isolated and was restricted to only one shot on target from long range late in the second half.

It was another lesson for Fulham following their return to top-flight football, with the Cottagers having now conceded 12 goals in five games – the worst defensive record in the division. Man of the match – Bernardo Silva (Manchester City)

Bernardo Silva was the architect for most of Manchester City’s attacking play, his vision and eye for a through ball leading to five key passes in the match and David Silva’s goal in the first half. ‘It could have been more than three’

Manchester City manager Pep Guardiola:  “It could have been more than three goals, considering the chances we created.

“After an international break it’s always a mystery how you’ll come back, and Fulham asked us a lot of questions. They will have a good season and I want to give Fulham a lot of credit.

“But we were aggressive when we had the ball and we created chances. Today we had many, many clear chances to score and we need to work at scoring more.

“I believe in all the guys in my squad – Sane, for example, is only 22 and he realises why he hasn’t played many minutes. But he did well today.”

Fulham boss Slavisa Jokanovic:  “We started both halves conceding early goals. The result was fair and if you don’t perform perfectly it’s so hard to do well against Manchester City.

“Our performance was a little shy and we didn’t connect our play well enough. We had some moments in the game when we enjoyed possession but we didn’t have end quality.” The stats – Man City extend run against newly promoted sides

City begin their Champions League campaign at home to Lyon on Wednesday, kick-off 20:00 BST, before visiting Cardiff in the Premier League on Saturday, 15:00.