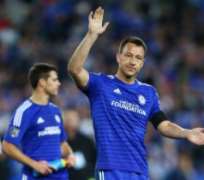 Maurizio Sarri has revealed that John Terry has an open invitation to join Chelsea's coaching staff, but the Italian believes the former captain is unlikely to take it just yet as he wants to carry on playing this season.

Terry this week turned down a move to Russia with Spartak Moscow after leaving Aston Villa last summer.

Sarri admits he would like the central defender at Stamford Bridge, where Terry left in 2017, in a coaching capacity if he cannot earn a playing contract elsewhere.

“The last time I have spoken with him, he told me that he wants to play for another season,” he said. “But I don't know now the situation. I am talking about a week ago. Chelsea is his home, of course. I'm open to the idea of course.

“For sure, he will be a point of reference for me. For everybody here, I think. I don't know if there is a chance. He told me a lot of things, that he wants to play. I don't know. I'd have to speak to him.

“It's up to him. If he wants to play for another season, I think it's right that he tries to play. But, if he wants to help us, I'm really very happy.”

Sarri though believes a dual player-coach role is out of the equation for the 37-year-old.

“I think in the coaching staff, I think,” he said. “Because, as I said before, I want to give space to the young players. Fortunately, we have very strong young players: Loftus-Cheek, Hudson-Odoi, Ampadu… and I'd like to give them the right space.

Chelsea are in action at home to Cardiff City on Saturday but Sarri believes they are still a long way from title contenders despite four wins out of four so far.

“At the moment, I can answer Manchester City or Liverpool [are the contenders], he said. “We need another step, I think, to be at the same level.

“I think that this season is too soon for Chelsea, but I hope not. It's very difficult to close a gap of 30 points at the beginning of the season. To close that gap in only one season is very difficult. But I think also we need to improve, and we can improve.

“My feeling is now we are not a very solid team in the defensive phase, of course. So I think we need to improve. And we can improve. My feeling during training is this team can improve.”

Sarri meanwhile has ruled out quitting smoking any time soon as he loves cigarettes too much.

Chelsea could have Cesc Fabregas on the bench after he returned to first team training but Emerson, Davide Zappacosta and Ruben Loftus-Cheek are all likely to miss the Cardiff match.