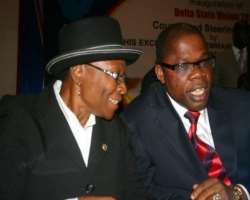 The House has been on three weeks recess after its inability to swear in the member elect, Mr. Kinsley Philips representing Ika South constituency following an Abuja Court of Appeal Judgment declaring him as the lawful candidate and member-elect in the 2007 general elections against the former sacked speaker, Mr. Martins Okonta, who INEC initially declared the winner.

THEWILL investigations revealed that should the clerk of the Assembly refuse to swear in the member elect as directed by the court, there may be possible clash between the supporters of theã€€embattled speaker and that of the member-elect.

Sources close to the sacked speaker confided in THEWILL that he has vowed to retain his former Ika South constituency seat as well as the speaker’s seat against the court judgment as he will be at the Assembly session when it resumes on Tuesday, as he has allegedly engaged the services of some thugs to unleash terror on anyone that may oppose his bid to resume as Speaker of the House.

THEWILL recalls that in a press briefing at the state House of Assembly complex last week, Mr. Efe Akpofure, SAN, counsel to the sacked Speaker had insisted that Mr. Okonta remains the speaker of the house adding that the Clerk has no constitutional right to swear in the member-elect, pending the determination of a substantive suit filed by the embattled sacked Speaker.

According to Mr. Akpofure (SAN) his clients had filed a motion at an appellant court to allow the status quo in the House to remain. "Until the motion is disposed of, Hon. Okonta remains the Speaker of the Assembly. It is only the Speaker and not the Clerk of the House that can swear in a member of the House in accordance with constitutional provision."

But in a swift reaction, Mr. Philips vehemently countered Akpofure's statement as according to him, Mr. Akpofure is only a lawyer merely "working for the N4 million legal fees he collected from Okonta".