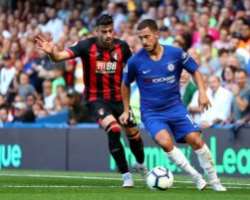 Liverpool’s new goalkeeper Alisson suffered a nightmare moment but it failed to prevent them maintaining their 100 percent start to the Premier League campaign with a 2-1 victory at Leicester City on Saturday.

First-half goals by Sadio Mane and Roberto Firmino ultimately proved more important than Alisson’s ill-advised fancy footwork after the break as Liverpool made it four wins from four games to stay top on 12 points along with Chelsea.

The London side had struggled to break down a stubborn Bournemouth outfit at Stamford Bridge but goals from substitute Pedro and Eden Hazard in the last 20 minutes secured a 2-0 win to make it four in a row for new Blues manager Maurizio Sarri.

Champions Manchester City got back to winning ways after their surprising draw at Wolverhampton Wanderers by beating Newcastle United 2-1 at home with Kyle Walker scoring the winner after DeAndre Yedlin had cancelled out Raheem Sterling’s opener.

While Liverpool have won their first four league games of the season for the first time since 1990, big-spending West Ham United suffered a fourth consecutive league defeat and remain rooted to the foot of the table.

It seemed they were on course for their first point of the season but Wolverhampton Wanderers substitute Adama Traore struck in stoppage time at the London Stadium.

While promoted Wolves enjoyed their first top-flight win since February 2012, West Ham’s woes continued as they have lost their first four league games for only the second time.

“I don’t think it is a bad start, it is a very bad start,” manager Manuel Pellegrini said.

“Here at home to lose we must be very worried.”

SAINTS WIN
Southampton beat Crystal Palace 2-0 away for their first win of the season — Liverpool loan signing Danny Ings and Pierre-Emile Hojbjerg on target for the Saints.

Brighton & Hove Albion hit back from two goals down to draw 2-2 at home with Fulham thanks to Glenn Murray’s second-half double after former Chelsea player Andre Schuerrle and Aleksandar Mitrovic had put Fulham in control.

Everton drew for the third time in four games after being held 1-1 at home by Huddersfield Town.

Liverpool were not at their best at Leicester and Alisson’s error was a nasty reminder of the Loris Karius howler that proved so costly in last season’s Champions League final loss.

Instead of clearing the ball midway through the second half the Brazilian opted to try some clever footwork and was robbed of possession by Kelechi Iheanacho, who centred for Algerian Rachid Ghezzal to give Leicester a lifeline.

Manager Juergen Klopp said Alisson’s mistake was “not cool” but he was happy that Liverpool still “ticked the box.”

“In the end, if Alisson with the first touch puts the ball away, everything is fine,” he said. “For some reason, he didn’t do that, he dribbled and they scored the goal.

“That’s it. I said to him, it’s the best game to do it because we still won the game.”

Chelsea have been equally impressive since the start of the season and once again on Saturday they showed patience to score late goals, as they did in wins against Arsenal and Newcastle.

“They (Bournemouth) were very organised and they defended very well but usually in this match you have to be patient because you can win in the last 20 minutes.”