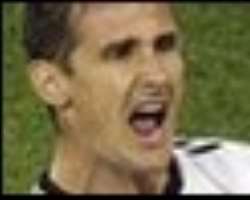 Germany provided a real signal of intent with a thrilling demolition of 10-man Australia to get their 2010 World Cup campaign off to a flying start .

Coming into the tournament without injured talisman Michael Ballack, doubts over the future of coach Joachim Loew and the second-youngest squad in the competition, many might have expected Germany to struggle in South Africa.

But if their effervescent display in Durban is anything to go by, the three-time champions could be real contenders for the title come 11 July.

Lukas Podolski and Miroslav Klose continued their remarkable scoring record at international level with a goal apiece to take their joint tally to 88, Thomas Mueller and Cacau added the gloss, while in playmaker Mesut Ozil they appear to have found a real superstar.

They were aided by the harsh dismissal of Australia's key man Tim Cahill, given a straight red card for a clumsy but hardly malevolent challenge on Bastian Schweinsteiger on 55 minutes.

Germany, though, had given notice of their attacking class long before that.

Klose has already been denied by Aussie keeper Mark Schwarzer when Podolski drilled in the opener from Mueller's cross, and moments after Klose had wasted another glorious chance, poking wide from eight yards, the Bayern Munich man nodded in Phillip Lahm's delicious cross to make it 2-0.

In fairness, Australia had the odd half-chance, Jason Culina heading a Brett Emerton cross over and Richard Garcia sending a snap-shot past the post – while a second-half appeal for handball against Per Mertesacker in the box might have warranted closer inspection.

But what Germany lacked in defensive strength, they more than made up for in pace, power and technique up front.

Ozil twice had the chance to get on the scoresheet having been sent through one-on-one, his first effort cleared off the line by Lucas Neill and his touch failing him the second time.

And then came Cahill's sending off, after which Germany's domination was absolute.

Schwarzer did his best to keep the score down, saving twice from Klose, and once apiece from Sami Khedira and Podolski as Germany tore through the Australia defences time and again.

But the Fulham keeper could do little about Germany's third, Mueller tucking in off the post from the edge of the area, and even less about their fourth, substitute Cacau tapping in from Ozil's centre.

Loew took the opportunity to rest the likes of Klose, Ozil and Podolski thereafter and, as a result, the Germans were unable to maintain their fluidity in attack in the closing stages.

However, the Germans' work had long been done at that point and they saw the match out in comfort to take top spot in Group D and serve warning to their rivals in South Africa.